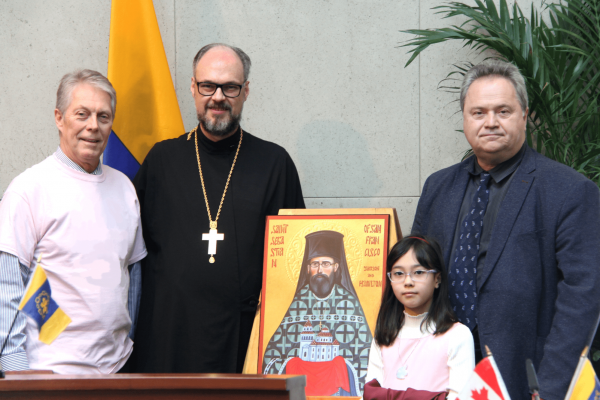 HAMILTON, CANADA (April 10, 2019) – The City Council in Hamilton, Ontario, Canada, received an icon of its own resident saint this week.

Mayor Fred Eisenberger, head of Canada’s ninth largest city, accepted the icon of the recently glorified Saint Sebastian Dabovich, who served as priest in the city a century ago.

“Saint Sebastian was the priest of the first multi-cultural Orthodox parish right here in Hamilton’s east end, on Beach Road, over a century ago, where people from many cultures worshipped together in the English language, at a time when such a faith community was a rare and unusual thing,” the City Council heard from Archpriest Geoffrey Korz, Dean of Ontario and Rector of the local English-language parish of All Saints of North America.

The Archpriest and Dean also entrusted the mayor with the responsibility to serve as keeper of the printed icon, a responsibility which he will pass down to future mayors, to whom the Orthodox Christian communities will look each time they visit their City Hall, welcome visiting dignitaries from abroad, and remind all citizens of the Canadian city of this local hero who led and held together a multicultural community who was one in faith and spirit in a century of war and division.

On hand for the presentation was Rajko Djudjevic, President of Saint Nicholas Serbian Orthodox Church, a parish whose founders and ancestors made up a majority of the faithful in the community served by Saint Sebastian.

“Generations to come in this city and across the country will look back, seeking the grace of God in the person of His first saint of this city, Saint Sebastian. What they will find is one of God’s holy ones who drew people together beyond their language and nation, to their Eternal Country,” the Archpriest concluded.