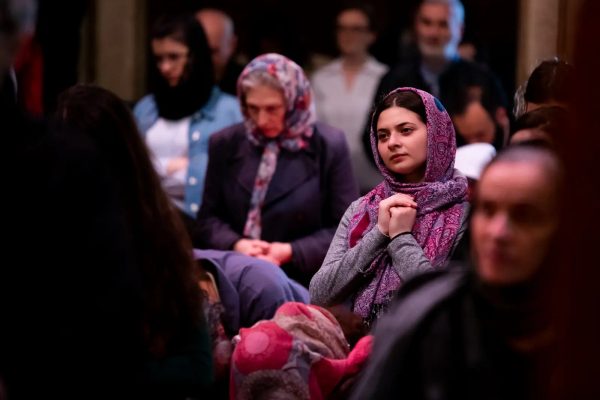 The modern Western world seems to be one of the few places where the wearing of a headscarf in a sacred temple is a matter of widespread contention. Perhaps this is to be expected, since we live in a society that is distinct from almost any other, and based entirely on individualism.

The basis of everything in the Orthodox Church is Holy Tradition – as Saint Vincent of Lerins has stated, “in the Catholic Church (i.e. the Universal Church – the Orthodox Church) itself, all possible care must be taken, that we hold that faith which has been believed everywhere, always, by all”.  Holy Tradition includes the combined inheritance of the Holy Scriptures, the Church Fathers, the Holy Services, and the hymnody of the Church, across the centuries and from every place, taken together.

To make the mistake that the Orthodox Church is a battle over Biblical quotes, or improved enlightenment over time is to reduced Christ’s Church to simply another flavour of Protestantism with more accurate creeds and councils. Holy Tradition – and the whole package it contains – makes up the Orthodox Faith.

By extension, the other familiar maxim also holds, lex orandi, lex credendi (originally from St. Prosper of Aquitaine) – the law of worship both reflects and determines what is believed.

Taken together, what reasons does the Holy Tradition of the Orthodox Church give for women wearing a headscarf?

•     For the sake of the angels (1 Cor 11:10). Saint John Chrysostom tells us the headcovering induces the woman to humility, and to preserve her virtue, tying in the wearing of the veil to the virtue of chastity – not something left to “personal choice” (c.f. Homilies on the Epistles of Saint Paul to the Corinthians);

•     Saint Paul tells us this is the universal practice of the Church for women to pray with their heads covered, and that if any man seem to be contentious (i.e. if anyone wants to argue about this question), we have no such custom (i.e. to argue about the matter), neither the churches of God. (1 Cor 11:16).

•     As a show of reverence before the holy relics of the saints, whose holy remains are sanctified by the grace of God, and which often work miracles;

•     As a show of reverence before the Ark, which rests at all times upon the Holy Table in every temple, and contains the reserve Holy Mysteries;

•     As a show of reverence before the Holy Chalice, when partaking of the Body and Blood of the Lord Jesus Christ;

•     In emulation of the Mother of God, whose holy example is given to the faithful through countless icons in every temple, including those which are miracle-working and myrrh-streaming;

•     In emulation of the holy example of the women saints of every century and nation, who provide for the Orthodox faithful trustworthy images of the way to live out the teachings of the Bible in practice;

•     In emulation of the universal practice of the Church which – with few exceptions (including the secular, post-Christian West) – observe modesty in all holy places. This is standard across Christian cultures, from the Holy Land to the Slavic world, from Africa to Scandinavia, from Southeast Asia to the Near East, at least until the post-Renaissance era.

•     To affirm the distinction between male and female from the time of Creation (Gen. 5:2), against which modern ideologues, secularists and activists bristle.

Those who would try to have the Church conform to modern, secular agendas from outside the Church will obviously disagree with the standards set out in the points above.

The topic of head coverings may be avoided by many parish priests, often because the historical, patristic, traditional practice could lead to conflict and pushback from modern-minded people in a given parish. Much more, such a practice would offend the position of ideological feminists, who see their political worldview as somehow interchangeable with the historical, patristic, traditional practice of the Church, and would not be happy to be told otherwise.

In the modern West, the freedoms we enjoy extend to the personal freedoms we exercise within the Orthodox Church, as far as they do not violate the limits of pastoral authority. One can certainly exercise the prerogative to argue in favour of the freedom from wearing the veil in an Orthodox temple: indeed, people argue for all sorts of things in the name of modern liberties.

What one cannot do is argue that women going without a headscarf in an Orthodox temple is somehow in keeping with the Holy Tradition of the Orthodox Church, or that the practice is in any way representative of any major time or place in the Orthodox Church outside the secular, post-Christian West.

Far from being representative of the pious practice of Orthodox Christian women, the absence of the head covering in an Orthodox Church is an outlier from the teaching or practice of the Church Fathers. It is an anomaly from Church practice in virtually any other century or place. It forgets the inherited practice as if modernity alone sets the standard for Orthodoxy. It represents a regretful disregard for the presence of holy things within the temple of God, as if the secular world has engulfed the consecrated walls of God’s Church.

It should therefore be no surprise that the practice of women wearing headscarves in the holy temple should be called into question in the modern West, of all times and places – since it is only in the modern West that the specters of forgetfulness, impiety, and secularism cast their long shadows across the face of our churches.