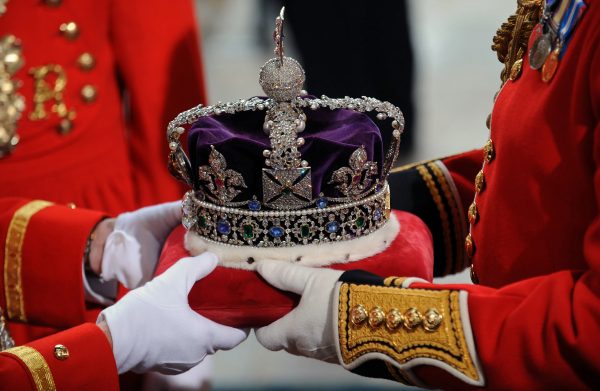 A few days ago, crowds gathered in sorrow around the front gates of Buckingham Palace in London. The waited, and they watched.

Finally, the flag on the palace was lowered, and they knew Her Majesty the Queen had died.

Spontaneously, the crowd broke into song.

They sang, “God save our gracious Queen, long live our noble Queen, God save the Queen!”

Most people recognize this as the national anthem of Great Britain.

It is, of course, also Canada’s second national anthem, although many have forgotten it.

In six places in Holy Scripture, we find the words, “God save the King”.  Two are most famous.

The first occurs in 1 Samuel (1 Sam 10:24), where we read, Samuel said to all the people, See ye him whom the Lord hath chosen (referring to King Saul), that there is none like him among all the people? And all the people shouted, and said, God save the king.

The second occurs in 1 Kings (1 Kings 1:39), where we read, Zadok the priest took a horn of oil out of the tabernacle, and anointed Solomon. And they blew the trumpet; and all the people said, God save king Solomon.

George Frideric Handel wrote his famous anthem for coronations, based on this verse. We’ll hear it played again in a few weeks, for the first time in seventy years.

The Orthodox Church – from the time of the Old Testament, straight through the days of the early Church to the twentieth century – is filled with kings and queens who are saints and even martyrs for Christ.

These are examples of holiness and self-sacrifice.

We have famous examples, like Saint Constantine the Great, who not only Christianized the Roman Empire, and made Christianity legal, but convened the First Ecumenical Council which defended Orthodoxy against the heresy of Arianism.

Or the Empress Theodora, who after nearly two centuries of the destruction of holy icons throughout the Byzantine Empire, courageously restored them to the churches under her rule, despite fierce opposition.

Or the passion-bearer Tsar Nicholas II, who faced the assaults of the atheistic Bolsheviks, and with his family were led to the slaughter, trusting in Christ, and praying for their captors.

Orthodox Christians who deeply understand their faith also understand why monarchy has throughout time been an instrument of God to sanctify the fallen world.

Monarchs are not chosen by men – they are only accountable to God.

Christian kings and queens usually do not achieve their positions – or keep them – because of buying off public opinion. They are not voted in, or voted out. The passions of mankind affect them as individuals, but it is the hand of God – not political ambition or an election campaign – which puts them in their place of rule.

A wonderful book, Pious Kings and Right-Believing Queens, compiles the lives of hundreds of such saints – all of them kings and queens. Many of these saints are martyrs for Christ.

One can hardly imagine a book about saints entitled Pious Presidents and Right-Believing Prime Ministers – of course, there is no such book!

We do not have to look very far to find examples of leadership based on ambition, and the kind of results ambition brings to the world.

The Holy Gospel presents us with a stark contrast to these righteous kings and queens, in the person of King Herod.

Of course, this Herod was not a real king – he was a political appointee, by the Romans. He was a fake king.

The Venerable Bede tells us John the Baptist was righteous because of his truth-telling: Herod was not. He lived by lies. He married the wife of his dead brother, and then, while trying to impress his friends on his birthday, he made a very stupid promise to the daughter of his new wife.

It was this promise which eventually led him to murder Saint John the Baptist.

Brothers and sisters: righteous people are not manipulated by the opinions of their friends.

Saint John Chrysostom tells us we all – as Christians – actually own that to people who are living sinfully. We owe it to people to tell them the truth.

One is reminded of our late Queen’s televised Christmas messages each year, in which she always spoke about the birth of Christ.

Who else would do that? Would some elected political leader do that?

Even as the head of a heterodox church, she spoke the truth, and lived righteously – and was on her knees in prayer for her nations and her family every night – literally, I might add.

You can be sure Herod was not doing that.

Righteous kings and queens – the saintly ones – are given to us as icons, here on earth, as heads of nations, to show us grace, and holiness, and righteousness, incarnate within our very governments.

For Orthodox Christians, this is not a philosophical concept, because we recognize that Christ sanctified all creation – including governments – by His incarnation in the flesh.

Any Orthodox Christian who truly understands the Orthodox faith and the teachings of the Church Fathers will also have learned this – or at least, will not reject this when they hear it.

Dear brothers and sisters, as we give thanks for the blessings of seven decades of rule of a righteous Queen of our own country, let us recall the hundreds of kings and queens whom God has raised up as saints of the Orthodox Church: true icons of holiness who are praying for us before the throne of God, in the Eternal Kingdom.