When we were preparing to go, we didn’t know much about this southern African country. We only had a few weeks’ notice and no time to research. The news we heard from others painted a bleak picture. We were starting to get nervous. We were pleasantly surprised to find a very different picture when we arrived.
Amanda Eve Wigglesworth | 25 January 2010

I keep dreaming that I have spontaneously gotten on a plane (or two, or five) and flown back to Zimbabwe. Something about the place sank its teeth deep into me, drawing up memories of other places that bit into me with fervour—places that haunt my memories and tease me with the desire to return. It has been eleven years since I left my first love, Mauritius, and I have never shaken it. It is a part of who I am. On the journey home from Zimbabwe, I could tell that I had fallen in love again. The recurring dream of impulsively returning reinforces this sense that part of Africa has returned home with me, and that part of me is still in Africa. I must tell you about the times when Africa took me by the hand, when we walked side-by-side, when we met each other face to face, when we smiled at each other and embraced, and when we said goodbye.

When my husband Kevin and I originally applied to go on a short-term mission with the Orthodox Christian Mission Center (OCMC), we had applied for the team to Tanzania. By the time our application was processed, that team was full. We started preparations to go to Nigeria. One week before we were scheduled to leave, the team’s visas were denied. It seemed that Zimbabwe was the next option. What did God have in store for us? Was He trying to tell us that it was not His will for us to go on a team this year? Were spiritual forces at work to prevent a team from going? As the departure date for Zimbabwe grew closer, people were asking if we were getting excited. Given the circumstances, I was waiting for the other shoe to drop. Would we be going to Zimbabwe? I wasn’t sure. Thanks be to God,: our team did go to Zimbabwe and we were able to experience what God is doing there through the Orthodox Church and Metropolitan George. 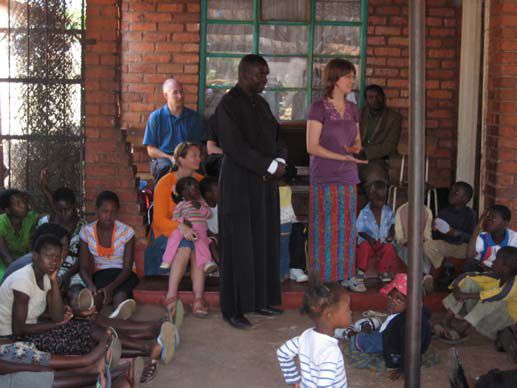 When we were preparing to go, we didn’t know much about this southern African country. We only had a few weeks’ notice and no time to research. The news we heard from others painted a bleak picture. We were starting to get nervous. We were pleasantly surprised to find a very different picture when we arrived. Yes, the politics there are not good. Yes, HIV/AIDS is a huge problem (Zimbabwe has the 4th highest rates in the world). Yes, hunger is a problem. Yes, there are utility shortages. But, things have improved greatly in the last six months. We felt safe. People radiate with joy. Even when faced with extreme poverty, the poverty was easy to miss because the joy and excitement of the people overshadowed their lack of resources.

Over the next two weeks, we taught the people about many topics. They are hungry for instruction about the Orthodox Church and way of life. We found so much joy during the teaching times as we shared from our own knowledge and experience, and tried to answer their many questions. They also bared their souls to us by asking very personal questions before and after sessions, as well as during the gender- and age-specific sessions. I was able to relate on a deep level with one woman, Maria, as we shared our experiences of caring for a family member and being present as they left this world. This meaningful conversation helped to reinforce our shared humanity and the struggles that all human beings face.

We stayed in Harare (the capital) most of the time, but we also travelled to Bulawayo (the second largest city in Zimbabwe) and some small villages. In one of these villages, Mrehwa, we witnessed their Peanut Butter Project. We had never met them before, but each woman embraced every team member with such excitement, energy, and length that it appeared as though they were greeting long-lost relatives. They honoured us like dignitaries and happily showed off the village. We were also able to try grinding the peanuts and tasting the result. It tasted just like the organic peanut butter I buy at home! The women cooked a traditional Zimbabwean meal for us including meat (something that is always rare in villages). We blessed them with food, toys, school supplies, and candy which had been sent in crates from Greece. His Eminence also blessed them by buying their entire stock of peanut butter as well as handcrafts they had made (which he then distributed as gifts). The entire village was blessed that day, and so were we.

In the village of Hurungwe (outside of the town of Karoi), we participated in the service to consecrate the foundation of their church. Let me take you there :

Red dust kicks up from the ground, highlighting the stark beauty of beiges and browns in the fields and the leafless trees. The rains won’t begin for at least another month—you can taste the dust coating your throat. A group of men are singing in jubilation and stomping the dust with vigour. They keep the beat of invisible drums with their hands and one man has shakers and a whistle.

The tiny village of Hurungwe has little to offer— tattered clothing, bare feet, and hungry bellies are in abundance— but today their spirits are full because today their bishop is visiting with a mission team from the United States and Canada. Today, the foundation stone of their new church will be placed into the foundation; it will go under the place where the altar will be built.

Emotions are high for everyone. The team members assist in the service and watch their names being lowered into the foundation as founders of this African church. As they clap and dance along to the songs of the Shona women, they know a part of them will remain in Africa forever.

In Marondera, we saw a building project for a new mission centre which will eventually have a church, a clinic, a school, an orphanage, and a home for a priest. His Eminence dreams big, and big things are happening as a result.

We were blessed to witness a Shona wedding of a young diaconal candidate. His ordination to become a deacon is scheduled for November 2009. The Metropolitan indicated that this young man will likely become a priest soon after he becomes a deacon. This is very exciting news because there are so many Orthodox people but so few priests to serve them.

Currently, there is one Greek priest (Fr George) who serves at the Greek cathedral in Harare, and two Shona priests. One of them, Fr Rafael, serves a community of approximately 300 people in Bulawayo. The people speak Ndebele there so Fr Rafael serves in English and the people sing in English, Ndebele, and Greek. The other priest, Fr Augustine, serves two Shona communities : St. Nektarios (over 800 members in a church that seats 200) and another community in Warren Park (approximately 300 people meeting in the yard of the priest’s mother-in-law). Since the priest speaks the language of the people, these two churches are able to have services primarily in Shona, but they also use some English and Greek. Translation of services is on-going, and developing music in a local musical style

is yet to begin. Currently, the churches use Greek melodies as well as the Greek school of iconography.

I’ve mentioned the Greek people a few times. This may have surprised you. It certainly surprised us! In all of our expectations for Zimbabwe, we did not expect to encounter a little Cyprus and Greece! Many of the Greek people in Zimbabwe are third or fourth generation Zimbabweans. Many still refer to themselves as Rhodesians, since the country has only been called Zimbabwe for 29 years. It was hard to wrestle with the idea of white Africans, but I realized that they have lived there longer than my ancestors have been in North America. Saying that they cannot be African because they are white, is like saying a second or third generation Asian or African, cannot be North American simply because they are not white.

Despite their African roots, the Greek community has remained very distinct, and has maintained close ties with Greece and Cyprus. We enjoyed visiting with these people too, often for yummy Greek meals. We were able to tell them about our experiences with the black churches and how receptive the people are. They were able to tell us stories of Zimbabwe and how it has changed.

One Greek woman we encountered is St Efterpi of Harare. She reposed approximately six years ago. We heard stories of her life and of the miracles after her death. We saw her crypt and experienced the fragrance of myrrh that exudes when she is present. We were able to bring back some of the healing oil that exuded from her incorrupt body that was discovered when she was exhumed three years after her death. This was a very unexpected experience!

At the end of the day, it was hard to leave because of the relationships we had started to form. After two weeks of clinging to us like Velcro, a few small children will now be wondering, “Where did the white women go?” We connected with brothers and sisters in Christ of all colours, genders, and ages in various ways. As we shared our stories and the people shared theirs, we realized how much we have in common even when our day-to-day lives are so different. It was hard to say goodbye to our remarkable brothers and sisters in Christ after such a short time, but we know that they will be praying for us, our churches, and the next team that will come to serve them. Already, I am wondering whether I will be a part of that team. When God asks, “Who shall I send to Zimbabwe?” Will you answer, “Here I am, Lord. Send me”?