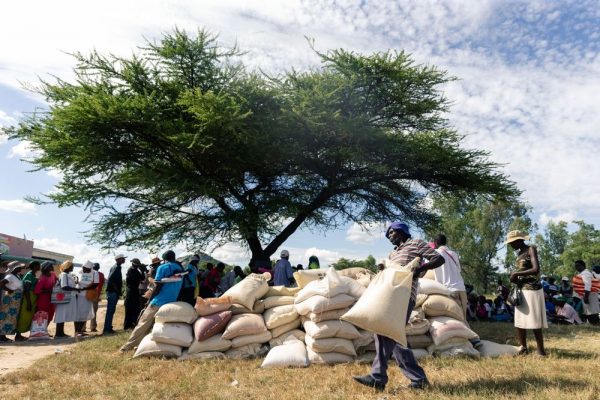 A food shortage in Zimbabwe has left parents having to choose between medicine or a meal.

The Agricultural Minister Perrance Shiri said on Thursday that there was only enough grain in its strategic reserves to last just over a month.

There has been little rain and Cyclone Idai’s destruction of soil last year has not been recovered from, so crops are struggling.

Zimbabwe consumes about 80,000 tonnes of maize every month and the country currently has just over that at 100,000.

Basic foods have rocketed in price and the country has bought tonnes of maize from neighbouring countries to try to supply its own people.

“It’s really difficult at the particular moment in terms of just getting access to food…one of the things that I really noticed is that people would travel [a long] distance to try and go and get food, we’re talking about 40 kilometres distance to probably the nearest places where they can get access to food. But it’s also difficult in the sense that, for them, to just get the money to buy the food is a real problem.”

Mr Maswera explained how Tearfund is promoting a practise called conservation farming, where a family farms a piece of land the size of a basketball pitch and is able to feed themselves for a whole year, giving food to the family acting as a mitigation against drought affecting other areas of land.

He added that weather has been the main cause of the problems, saying: “We’ve seen changes in our climate over the years, it was not common to receive the kind of cyclones that we’ve received, like Cyclone Idai last year – a big surprise.

“In the places where Cyclone Idai hit there were tonnes and tonnes of soils that were taken, it means that it has left a number of families with very bad agricultural land, they have to find ways to revive that kind of land.”

Speaking about how to pray, Mr Maswera advised: “pray for wisdom for our leaders and politicians in the region, so that God would really give them wisdom – Joseph type of wisdom – to know how they can come up with strategies that will mitigate this impact.”