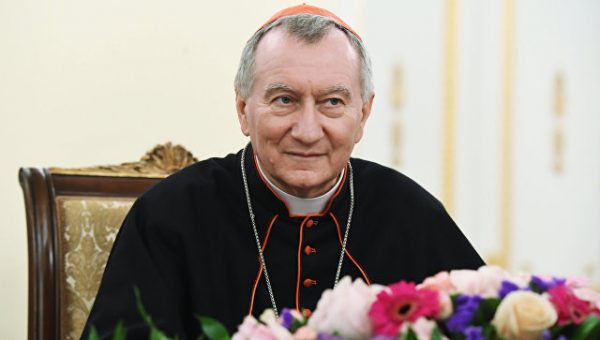 In a Vatican Radio report, Cardinal Parolin said Pope Francis “was pleased with the impressions and positive results which I shared with him… The Pope as we know – and as he repeated also in this instance – is very, very attentive to all possible occasions for dialogue. He is very attentive to evaluating all existing occasions for dialogue, and he is very happy when steps forward are made in this direction,” he said.

Cardinal Parolin said he relayed the many greetings he was asked to give the Pope “from all the people I met, including the warmth and closeness of the Catholic community… and the fraternal greetings of Patriarch Kirill.”

During his visit, Cardinal Parolin met with civil authorities, including President Vladimir Putin and Foreign Minister Sergej Lavrov, as well as with Russian Orthodox leaders Patriarch Kirill and Metropolitan Hilarion.

These meetings, he said, “were truly characterised by a cordial, listening, and respectful climate. I would define them as important and constructive encounters.”

During his meeting with Mr.Lavrov, Cardinal Parolin brought up the needs of the local Catholic Church, especially the need for several churches confiscated by the Communist regime to be returned. He said the local Catholic community needs these churches in order to provide “adequate places of worship.”

Cardinal Parolin told Vatican media his meeting with Patriarch Kirill took place in “the new climate established in recent years”, beginning with the 2016 meeting between Pope Francis and Patriarch Kirill in Havana, Cuba.

“We spoke a little about this new climate or atmosphere, which permeates the relations between the Russian Orthodox Church and the Catholic Church,” he said.

Cardinal Parolin said his Orthodox interlocutors were “touched by the faith and religiosity of the people” on display as the relics of St. Nicholas of Myra visited Moscow and St. Petersburg. Some 2.5 million people visited the relics before they were returned to Bari in Italy.

“It was underlined how even many Russians, who belong to the Orthodox tradition but do not practice, in this occasion have moved closer to the Church.”

Other topics discussed, he said, were ways of taking advantage of this new climate to further improve relations and collaborate on cultural, academic, and humanitarian issues. He said both parties greatly insisted on the need for the two Churches to carry out “incisive and efficacious humanitarian works” in the many situations of conflict around the world.

“Slightly thorny issues were also touched, respectfully and at the same time frankly, regarding relations between the two Churches. But, we tried to give them – at least in my opinion, what I was able to glean – a positive sense, that is, to explore common paths for dealing with and for seeking to give birth to a solution to these problems.”

Turning to the situation in Ukraine, Cardinal Parolin said that, “for now, there is no news; perhaps, it is premature”. “If there are seeds of good, which we have sought to sow,” he said, “we hope the Lord will make them sprout and bring them to fruition.”

He said the “Ukrainian question” is of “great concern for the Holy See” … “The Pope has pronounced on this theme several times. It’s obvious that it could not be ignored, this theme; it couldn’t be forgotten in that circumstance. Above all, I would speak of the need to try to see and to evaluate if there were some concrete steps that could be made towards a durable and just solution to the conflict, within the instruments currently available, which are practically the Agreement between the two Parties. It has been noted that the Holy See has insisted above all on the humanitarian aspects, beginning with the important initiative of the Pope for Ukraine. In this sense, for example, one theme is that of the liberation of prisoners. This is one humanitarian theme that could be truly important to giving a little impetus to the whole process, even the political one, in order to get out of this situation of stasis and to advance – for example –the theme of a truce or ceasefire, the theme of security conditions in the territory, and the theme of the political conditions necessary to make progress on a global solution.”

Cardinal Parolin said his meeting with President Putin in Sochi on Wednesday was “a cordial encounter”. He said the two men discussed the conflicts in the Middle East, especially in Syria, and the presence of Christians there. Both Russia and the Holy See, he said, are particularly interested in the theme of persecution of Christians and other minorities.

Cardinal Parolin said he presented the Russian president with “several situations of some difficulty for the Catholic community.” His main point, he said, was the desire to transmit the important role Russia has to play in promoting peace.

“Russia, for its geographical position, its history, its culture, and its past, present, and future, has an important role to play in the international community and in the world. Therefore, it has a particular responsibility regarding peace: both the country and its leaders have a great responsibility to build peace, and they must truly strive to put the higher interests of peace above all other interests.”

The first, he said, “was the beautiful moment of the Mass celebrated with the Catholic community. The Cathedral was packed full of people, and that was somewhat of a surprise since it was a weekday”. He also said he was touched “by the faith and devotion” of the people and by their “attachment to the Pope”.

Second was his brief visit to Mother Teresa Sisters in Moscow. “We were able to meet and greet all the people they assist, and even there the warmth they have the for the Pope was evident.”

Lastly, he mentioned his visit to the Orthodox Cathedral of Christ the Saviour in Moscow.

“The cathedral had been blown up during the Communist regime. So it was also a moment to recall this painful history, during which some people wanted completely to uproot the faith from the heart of the people and eliminate any sign of the presence of God and the Church in that land.” This attempt, he said, “did not succeed, because God is greater than the projects of men.”