Carrying the Cross of Truth and Righteousness 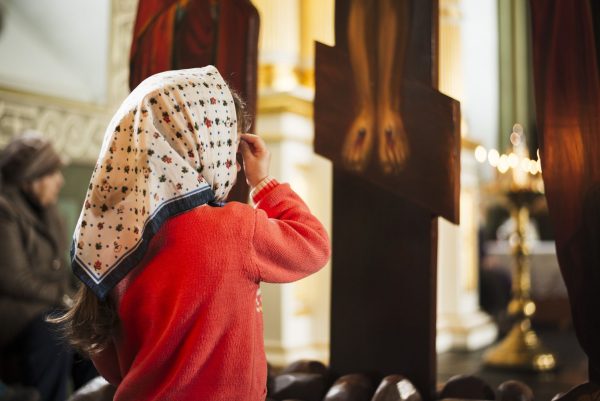 Life can be very confusing and challenging. The great gift of free will that God has given us carries along with it the awesome weight of responsibility and accountability. Sometimes we are tempted, knowingly or unknowingly, to despise the blessing of freedom that God has given us, wishing instead that someone or some thing would instead just tell us what to do and make our decisions for us. In other words, making decisions and choices is hard work. This is one reason, for example, why some people are tempted to support a totalitarian fascist government. They think, “Let someone else make the choices for me, and then I won’t have to deal with this burden any longer.” Let the government care for me, for they promise me prosperity and happiness. This way of thinking is deceptive, because in a totalitarian or socialist society it is not God Who is taking care of us, but sinful and selfish rulers, and in the end we will be taken advantage of and treated as servants and slaves. History has borne this out again and again, even up to today, in countries, for example, such as Communist North Korea, Communist China, Communist Cuba and now in Taliban controlled Afghanistan. God, on the other hand, Who wants us to be free, says that we are His brothers, and through Jesus Christ, we are His adopted children and family. Every day we face choices, and it takes wisdom, conscientious thought, guidance and prayer to try to make the right choices. God does not merely give us freedom and the gift of free will and then just leave us on our own to struggle in order to make the right choices. God gave us the light of truth when He sent His only-begotten Son into the world. Jesus said, “I am the Way, and the Truth and the Life.” If we know Christ then we will know the truth.

Discerning the truth is not only an exterior activity. To know the truth and to make the right choices means that we must also know ourselves. This means that we need to look deep within our hearts and see and know ourselves as we really are. It is not very pleasant to see and to acknowledge our own faults and shortcomings, and it takes humility to do this. The Pharisees were full of pride and self-righteousness. They completely avoided looking into their own hearts and seeing themselves as the hypocrites that they really were. Thus, truth for them became a distraction to the reality of who they were. They created their own “truth,” which for them was an external system of complicated rules and man-made traditions and rituals. Jesus chastised them for this hypocrisy and He revealed to them the sin and selfish pride that was in their hearts. As a result they hated Him and wanted to kill Him. We should not be afraid to speak the truth, but as the apostle Paul tells us, we must speak the truth in love (Eph. 4:15). We must also be prepared that when we do speak the truth in love, the devil will cause others to be jealous, angry and even hate us. This is because the devil hates the truth and does not want the truth to be known, for his very name means that he is the father of all lies.

When we avoid the truth, we drift into the realm of not only falsehood but also dishonesty. If we do not seek the truth (internally and externally), then we enter into a fantasy world of lies. Reality becomes a myth. Along with this we become accustomed to lying and being dishonest. Instead of honesty, lying and deception becomes a way of life. We might start out by telling a few so-called “white lies,” but then this gradually leads to worse lies and can lead us to a point where our entire life becomes one big hypocritical lie.

If we choose the right path, and if we choose to follow Christ and the truth, this does not mean that we have now necessarily defeated the devil. The devil never gives up and always tries to seduce us and ruin our salvation. Truth does not mean that we should be narrow-minded. Truth does not mean that we should judge or despise others, no matter what they believe in and no matter how they live their lives. Jesus loved all sinners; He sat at table with even the Pharisees, because, as Jesus said, He came into the world not to judge the world but to save the world, and that includes everyone, even the Pharisees. “If any one hears my sayings and does not keep them, I do not judge him; for I did not come to judge the world but to save the world” (John 12:47). Truth is not a reason to feed our passions and to become fanatics. The Holy Fathers of the Church teach us that the way of truth is what they call “the Royal Path.” This means that everything should be done in moderation, and extremism in any form and for any reason is always wrong and not the way of God.

In today’s world it has become exceptionally difficult to follow the truth. Many and various anti-Christian philosophies have come and gone throughout the history of mankind, but today’s prevailing philosophy could perhaps be the most pernicious of them all. Today’s hatred for truth and righteousness have gone to such an extreme that a world is being created where people don’t believe in any kind of truth at all, even if it is a false truth. The philosophy of today is a “non-truth.” For example, a philosophy is being promoted at the highest levels which says, that there is no such thing as man or woman or gender. Another perverted philosophy of today is so-called “critical race theory,” which is historically inaccurate and is a purveyor of division and racism — a mythological twisted lie. These perverted teachings are being foisted upon us, and even more shocking, they are inappropriately being taught to very young children. Jesus said in the Gospel: “Let the children come to me, and do not hinder them; for to such belongs the kingdom of God”….and whoever causes these little ones to sin, “it would be better for him if a millstone were hung round his neck and he were cast into the sea” (Luke 18: 16; 17:2).

How can we know the truth? If we have an open mind and open our hearts to Christ, if we say our prayers, if we go to the Divine Services, if we repent in Confession and receive God’s Body and Blood on a regular basis, then we will know Christ and we will know the truth. If we live by the Ten Commandments, the Beatitudes, the Sermon on the Mount, and the Golden Rule, then we will know the truth. John the Baptist’s and Jesus’ first words of preaching were to call on the people to repent for their sins. Herodias answered this call to repentance with anger and arranged for St. John the Baptist to be beheaded. Jesus’ call to repentance ultimately ended in His being condemned and crucified. Mary Magdalene, just like Herodias, was also called to repent, but unlike Herodias, her reaction was to weep for her sins and to change her way of life. She became one of Jesus’ most devoted disciples. Two thieves were crucified with Jesus. One thief railed at Jesus and considered Him to be a fool. The other thief repented for his sins, and his soul was saved.

When Jesus stood before Pilate, He said: “For this I was born, to bear witness to the truth. Every one who is of the truth hears my voice” (John 18:37). Truth, personified in Jesus Christ Himself, stood right in front of Pilate, but Pilate’s heart was closed and his spiritual eyes were darkened. He could not see the truth which stood in front of him. Instead, Pilate answered Jesus by saying, “What is truth?” (John 18:38).

Let us take heed to the words of the apostle Paul to Timothy: “For the time is coming when people will not endure sound teaching, but having itching ears they will accumulate for themselves teachers to suit their own likings, and will turn away from listening to the truth and wander into myths. As for you, always be steady, endure suffering, do the work of an evangelist, fulfill your ministry” (2 Tim. 3:3-5). Let us be “wise as serpents and meek as doves” (Matt. 10:16) and remain always on the pillar and ground of truth, Who is Jesus Christ our Lord. Amen.