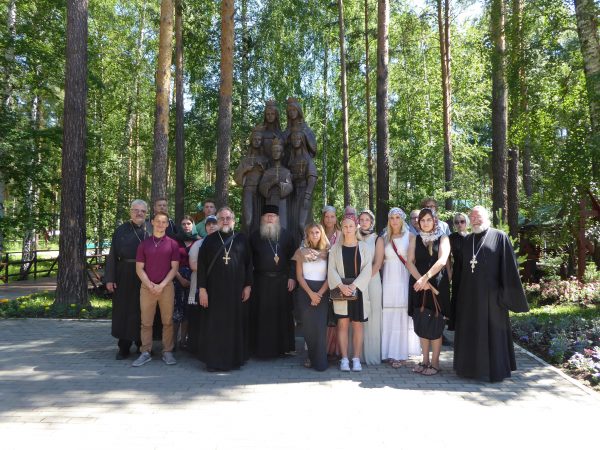 Pilgrims from the U.S. visiting Ganina Yama, 2018, year of the 100th anniversary of the execution of the Royal family.

Today we celebrate the memory of the holy Royal Passion-bearers of Russia, Tsar Nicholas Alexandrovich and his wife and children, Tsaritsa Alexandra Feodorovna, Tsarevitch and heir to the throne Alexei Nikolaevich, and the Grand Duchesses Olga Nikolaevna, Tatiana Nikolaevna, Maria Nikolaevna, and Anastasia Nikolaevna, who were brutally executed by the Bolsheviks in 1918.

In his “Catechism,”1 Metropolitan Hilarion (Alfeyev) explains that the saints of the church are divided into different categories, or “ranks,” according to the office or position that they held, and the particular spiritual struggles that they undertook. Each rank has its own special title. For example, the apostles are the direct disciples of Christ, chosen by Him for ministry, such as Peter, James, John, and Andrew. The martyrs are those who suffered persecution, tortures and death for their confession of Christ, such as Demetrius of Thessalonica and George the Trophy-bearer. Luminaries are saints who were bishops, such as Nicholas the Wonder-worker. Passion-bearers, such as the holy Royal new-martyrs who we celebrate today, were martyrs not specifically executed for their confession of Christ, but who imitated Him by patiently enduring suffering and death. The first glorified saints of Russia, two of the sons of St. Vladimir of Kiev and All Rus, the Great Princes Boris and Gleb, were passion-bearers. They were murdered by their older brother Sviatopolk in the year 1015.

As a result of her participation in WWI, Russia suffered financial ruin and widespread demoralization. There was a huge number of casualties at the front, and back at home there was widespread famine, while the empire fell apart at the seams. Already Russia was suffering much turmoil from some members of the aristocracy and intelligentsia who had turned their backs on Christ and Orthodoxy, and who instigated revolution, dissent and a reign of terror and murder of government officials. The last tsar of Russia, Nicholas II, was on his way back from the front when he was convinced to abdicate in favor of his brother, the Grand Duke Michael. When Michael refused to accept the throne, the monarchy collapsed, signaling the final deathblow to the Great Russian Empire. What resulted was sheer anarchy and chaos. There was widespread looting, crime and destruction, while various revolutionary groups struggled for control of the government. The sailors in Kronstadt revolted, the criminals were freed from the prisons, and the local police and militia were unable to maintain control and order. There was a massive work stoppage and strikes by factory workers and other laborers. The beautiful and magnificent city of St. Petersburg turned into a filthy and dangerous pig sty. Garbage piled up in the streets. Stores, hotels and various places of business were looted and trashed. Food was scarce. Symbols of the monarchy were destroyed or desecrated, as well as various churches and holy shrines. It was not safe for anyone to walk on the streets without fear of being shot, robbed, assaulted or arrested by the various revolutionary factions vying for control. Eventually the Bolsheviks, led by Vladimir Lenin, were the victors. This resulted in a civil war between the Red Army (Communists or Bolsheviks) and the White Army (those who were loyal to the monarchy). The Communists emerged victorious. Atheist in ideology, the Communists began a widespread assault and attempt to eradicate all vestiges of the monarchy and the Orthodox Church. Members of the aristocracy and clergy were arrested and either executed or sent to perish in forced labor camps. The churches and monasteries were all closed, looted and desecrated.

When Nicholas returned home to his family, they were placed under house arrest. Under Alexander Kerensky and the provisional government, the Royal family was treated with respect and enjoyed some privileges, such as church services in their private chapel. When Lenin and the Bolsheviks assumed control, the lot of the Royal family drastically changed. They were ultimately incarcerated in the governor’s house in Ekaterinburg. In the middle of the night of July 17 going into July 18, they were awakened from sleep. Under the pretense of being transferred again to another location, they were told to assemble in a room in the basement. Along with them were three devoted servants, their physician Dr. Botkin, as well as the family dog. Under orders from Lenin and the Supreme Soviet, an armed squad assembled in the room. The tsar was charged with treason, and the Royal family, their servants, physician, and even their dog were executed. Their bodies were conveyed to Ganina Yama (“Ganya’s Pit) near the village of Koptyaki, where they were dismembered and hastily buried in the Four Brothers mine. Today, their holy relics are enshrined in the Sts. Peter and Paul Fortress in St. Petersburg. The place of their execution, the Ipatiev house, which was called by the Bolsheviks the “House of Special Purpose,” was later destroyed by the Communists in order to hide their crime, and because it had become a place of pilgrimage. After the collapse of the Soviet Union, a magnificent cathedral called the Church on Blood was built on the site of execution. In 1981, the Royal Passion-bearers were glorified by the Russian Orthodox Church Outside of Russia, to be followed in 2000 by their glorification by the Moscow Patriarchate of the Russian Orthodox Church.

“Although the Bolsheviks, hating both Orthodox monarchy and all things Christian, martyred this family and tried in every way to eradicate all traces of them from the earth, in the end it is the Bolshevik legacy that is being forgotten, while icons of Tsar Nicholas and his family can be found in every church in Russia.”2 In the end, atheistic Communism has collapsed and Orthodox Christianity has triumphed. Holy Royal Passion-bearers of Russia pray unto God for us! Amen!

Commemoration of Venerable Anthony of the Kiev Caves, Founder of Monastic Life in Russia

We remember today our holy father among the saints Anthony of the Kiev Caves, the founder of monastic…