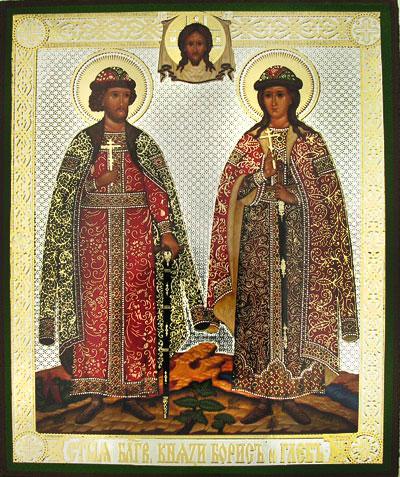 Last Sunday I explained that among the ranks of saints there is a category known as “Passion-bearers.” As a reminder, these are saints who did not specifically die for their confession of Christ, but who imitated Him in their sufferings and death. Today we celebrate the memory of the first glorified saints of Russia, the Right-believing Passion-bearers Boris and Gleb (Roman and David in Holy Baptism). Their father was the Great Prince St. Vladimir of Kiev, who brought the illumination of Holy Orthodox Christian Baptism to the entire Russian land.

St.Vladimir had twelve sons. His youngest were Boris and Gleb, who were known for their piety and meekness. However, when Boris was called upon by his father to lead an army to defend Rus against the Pechenegs1, St. Boris valiantly and obediently answered the call. Having accomplished his military mission, he was informed while traveling home, that his beloved father had reposed. Vladimir had an older son, Svyatopolk, nicknamed ‘the Accursed’, who had an evil and wicked disposition. It was Svyatopolk’s intention to seize the throne after the death of his father. St. Boris, well aware of his brother’s intentions, made known to him that he would do nothing to resist him and would fully support his succession to the throne. Boris only wanted peace and mutual brotherly love. Seeing the Christian faith and forbearance of the holy young prince, the devil worked on Svyatopolk and inflamed his ambition, ruthless disposition, insecurities and paranoia. Ultimately, the devil inspired Svyatopolk to arrange to have his holy younger brother murdered.

St. Boris, having become aware of his brother’s evil intentions, despite his assurances that he would not resist him, resigned himself to God’s will. For the sake of Christ, he decided that he would not try to fight in any way against his brother. Having informed his army2 that he would not raise his hand against Svyatopolk, the military dispersed, and the saintly Christian prince was now virtually alone and defenseless against his brother’s murderous intentions. Boris was encamped close to the River Alta, near southern Pereyslav. In the morning Boris requested that matins be served by the priest. Afterwards, he prayed for strength to endure his sufferings, as well as for the forgiveness of his brother. He then lay down on his coach in his tent and awaited his fate. Svyatopolk’s army arrived and murdered the holy saint with their lances. They then proceeded to massacre his entire entourage. As his body was being taken to the Church of St. Basil at Vishegorod, the saint bowed his head and it appeared that he was still alive. On Svyatopolk’s orders, the saint’s heart was then pierced, upon which St. Boris surrendered his soul to the Lord. This occurred on July 24 in the year 1015. Having reached St. Basil’s Church, St, Boris’ body was laid to rest and he was buried.

St. Gleb received news that his father was dying, which of course was a lie inspired by the devil, in order to have him also meet his doom from his brother Svyatopolk. As we know, by this time St. Vladimir’s soul had already passed into the heavenly realms. On his way to Yaroslav, Gleb was warned of the truth and that death awaited him from his brother. When Svyatopolk’s army approached, Gleb ordered his entourage to leave him alone by the shore, for he did not want any harm to come to any one else. This occurred in Smolensk. Watching from afar with sadness, Gleb’s companions witnessed the approach of Svyatopolk’s men. The same as his brother Boris had done, he offered no resistance, and he tried to sincerely greet his compatriots with love and humility. St. Gleb tried to dissuade them from their dastardly intentions. Non-plussed by his words, his own cook was ordered to murder him, and like an innocent lamb led to the slaughter, St. Gleb received the crown of martyrdom. This occurred on September 5, also in the year 1015. The wicked assassins hid the body of the saint under a tree. Svyatopolk was soon deposed by a popular uprising, and his brother Yaroslav the Wise seized power.

Five years later hunters found the incorrupt relics of St. Gleb, which emanated a Divine light. Prince Yaroslav had the relics brought to Vishegorod and laid to rest next to the relics of his brother St. Boris. Their veneration was soon recognized by the Church, and their tombs became a place of pilgrimage, drawing immense crowds of the faithful. Many miracles occurred due to prayers offered to the holy Passion-bearers. Then their holy relics were removed from the ground and placed in a specially constructed chapel and magnificent and beautiful reliquary. On July 24, 1026 a church of five cupolas built by Yaroslav the Wise was consecrated in honor of the holy martyrs. The Church of St. Basil was later destroyed and rebuilt. The relics of Sts. Boris and Gleb were translated to the newly built church on May 2, 1115, the Sunday of the Holy Myrhhbearing Women. Holy Right-believing Passion-bearers and Princes Boris and Gleb pray unto God for us! Amen!

Commemoration of Venerable Anthony of the Kiev Caves, Founder of Monastic Life in Russia

We remember today our holy father among the saints Anthony of the Kiev Caves, the founder of monastic…