Source: Vatican Radio
Natalya Mihailova | 16 September 2016
(Vatican Radio) Catholic and Orthodox theologians are meeting in the Italian town of Chieti for the 14th plenary session of their international dialogue commission. 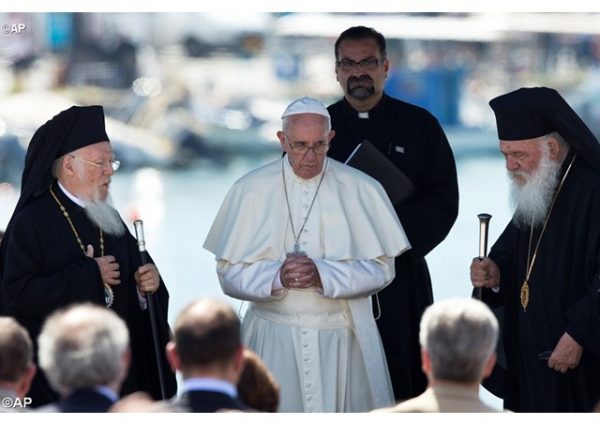 The meeting from September 15th to 22nd brings together two representatives from each of the fourteen Orthodox Churches, alongside 28 Catholic participants, under the shared presidency of Cardinal Kurt Koch from the Pontifical Council for the Promotion of Christian Unity and Archbishop Job of Telmessos from the Ecumenical Patriarchate.

The meeting will focus on discussion of a draft document, drawn up at the previous two sessions, entitled “Towards a common understanding of Synodality and Primacy in service to the Unity of the Church”. Participants will also share moments of prayer together with local Christian communities, including a Mass in the cathedral of San Giustino in Chieti on Saturday and a Divine Liturgy at the shrine of the Holy Face in Manoppello on Sunday.

To find out more about the meeting, Philippa Hitchen spoke to Mgr Andrea Palmieri, undersecretary of the Pontifical Council for the Promotion of Christian Unity. He noted that the issue of synodality and primacy is “one of the most delicate questions” in the relationship between Catholics and Orthodox. He says participants hope to arrive at a consensus that will enable them to publish a new document since the last publication was the Ravenna document which followed the plenary session of 2007.

Commenting on the recent pan-Orthodox Council which took place in Crete, Mgr Palmieri noted that the ten Churches taking part in that encounter approved a document on Orthodox relations with other Christians. The consensus among those Orthodox Churches, he said, opens up new horizons and “demonstrates the will of Orthodox Church to continue the theological dialogue, not just with the Catholic Church but also with other Churches and Christian communities”.

Speaking of the encounter in Cuba last February between Pope Francis and the Russian Orthodox Patriarch Kirill, Mgr Palmieri said all such meetings and exchanges between Church leaders provide a positive context within which theologians can advance their dialogue. He also pointed to the historic encounter last April between Pope Francis, Patriarch Bartholomew and the Archbishop of Athens Hieronymus on the Greek island of Lesbos.

The theological dialogues, he stressed, are not simply academic discussions, separated from the life of the Church but rather they are concerned with the very heart of the Church’s life. The themes of synodality and primacy, he said, are at the centre of attention right now for both Catholics and Orthodox, as they explore what it means to exercise one in relation to the other.  Discussing these themes, he said, means thinking together about ways in which a reconciled Church can better serve the mission of the Church to bring the Gospel to all people.