Source: DECR
Natalya Mihailova | 18 September 2015
On September 17, 2015, the commemoration day (according to the new calendar) of the Holy Martyrs Faith, Hope, Love and their mother Sophia, the heavenly patronesses of the city of Sofia, His Holiness Patriarch Neophytos of Bulgaria celebrated the Divine Liturgy at the church of St. Sophia the Wisdom of God. 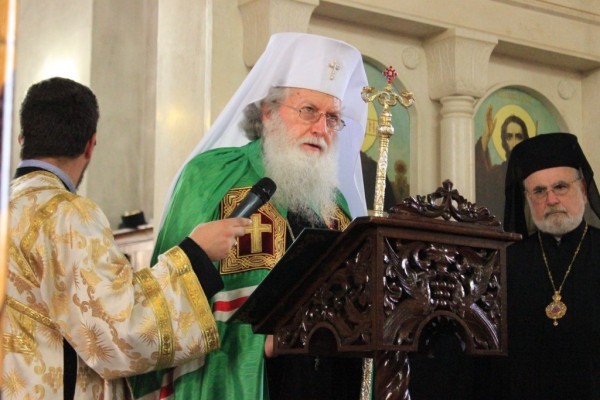 He was assisted by an assembly of Bulgarian bishops and clergy. Among his concelebrants was Archimandrite Philip (Vasiltsev), rector of the Patriarchal representation in Sofia.

After the Dismissal, Patriarch Neophytos addressed the congregation with an archpastoral homily.

After the service, Bishop Gregory of Branitsa led the congregation in a thanksgiving with the blessing of water.

Present at the thanksgiving, among others, were the Bulgarian Parliament Speaker Tsetska Tsacheva, Sofia Mayor Yordanka Fandakova, Minister of Culture Vezhdi Rashidov and other state officials as well as representatives of the diplomatic corps in Sofia.

The celebrations concluded with a National Guards parade, the website of the Sofia Representation of the Patriarch of Moscow and All Russia reports.