Celebrations in the Metropolia of Priamurye marking the millennium of the blessed demise of the Holy Prince Vladimir, Equal-To-The-Apostles, are concluded

Source: DECR
Natalya Mihailova | 29 September 2015
On 26 September 2015, Metropolitan Hilarion of Volokolamsk, chairman of the Department for External Church Relations of the Moscow Patriarchate, who was on his visit to Khabarovsk with the blessing of His Holiness Patriarch Kirill of Moscow and All Russia, celebrated the Divine Liturgy at the Cathedral of the Holy Transfiguration in Khabarovsk. 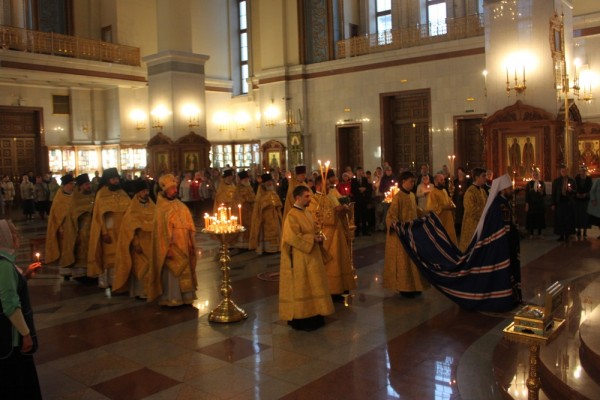 After the Liturgy, Metropolitan Ignaty of Khabarovsk and Priamurye warmly greeted Metropolitan Hilarion, expressing his joy over an opportunity to offer up, together with the DECR chairman, prayers of glorification to a great Russian saint and the Baptizer of Russia, St Vladimir, Equal-to-the-Apostles.

Metropolitan Hilarion of Volokolamsk conveyed to the worshippers the blessing from the Primate of the Russian Orthodox Church, saying in particular:

“With the blessing of His Holiness Patriarch Kirill of Moscow and All Russia, celebration marking the millennium of the blessed demise of the Holy Prince Vladimir, Equal-to-the-Apostles, are being held all over the territory of the Holy Russia. It is impossible to overestimate the importance of the event in the history of our homeland, associated with the name of the grand prince. Vladimir was a ruler of the pagan people, and when he was faced with the problem of choosing one religion, it turned out to be a difficult choice. Envoys from neighbouring countries, Catholics, Mahometans, Jews, and Orthodox, would come to him. As an honest politician who cared for his people Prince Vladimir also sent his ambassadors to various countries, so that they could see with their own eyes how people lived, believed and prayed to God there.

“The choice that the Holy Prince Vladimir made was prophetic, for it was revealed to him that the people entrusted to him by God would be enlightened by the Christian faith and would bring forth fruits that the Lord expected from them.

The DECR chairman thanked Metropolitan Ignaty of Khabarovsk and Priamurye for his missionary service in the Far East. “It is gratifying to see for me as chairman of the Department for External Church Relations, responsible for relationships between the Russian Orthodox Church and the Chinese Autonomous Orthodox Church, what attention you pay to cooperation with China and Chinese diaspora in our country,” Metropolitan Hilarion said.

That same day, the DECR chairman, in the presence of the administrator of the metropolia of Priamurye and in concelebration with the clergy of the Khabarovsk diocese, laid the foundation stone of a baptismal Church of the Holy Prince Vladimir, Equal-to-the-Apostles, in the territory of the Church of St Innocent in Khabarovsk and installed a memorial cross at the place of the altar of the future church.

The DECR chairman also visited the Church of the Nativity of Christ in Khabarovsk. Metropolitan Hilarion first visited this church in 1985, when he was doing the military service in frontier troops. Back then it was the only working church in Khabarovsk.