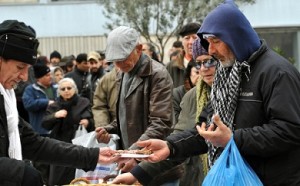 One-and-a-half tons of free barbeque-charred chicken, pork and lamb, and hundreds of liters of wine were being distributed to the public at the central Athens Varvakeios Market on Thursday, complements of the market’s butchers.

Traders at the city’s biggest permanent meat and produce market have been hosting a free barbeque lunch since the onset of the crisis on “Tsiknopempti,” or Smoky Thursday, one of the last days of feasting on the Greek Orthodox calendar before the run-up to Lent.

Meat sellers starting firing up their barbeques at 11 a.m. on Thursday morning and have installed a sound system to play music in the hope of creating a more uplifting atmosphere for hundreds of the Greek capital’s cash-strapped residents who took up the invitation.

The wine for the free lunch, which wraps up at 2 p.m., has been provided by the City of Athens.