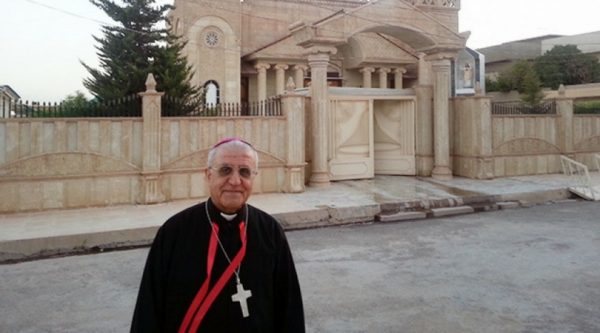 Although he has expressed hope for Iraq’s future, he has also expressed concern. Regarding the people who have been born, grown up and lived under ISIS rule, he says, “What do we do with the millions who have been educated under it?”

Archbishop Mirkis remains optimistic about the future of Christianity in Iraq, despite the persecution of ISIS over the past few years. In May 2016, Mirkis commented:

When our faith reaches the edge, even to the point of death, there is always an intervention of God, something amazing happens. This is the faith of the Old Testament witnessed in Exodus and (the) parting of the Red Sea, and in the New Testament with the resurrection of Jesus Christ. So, I don’t believe those who say that there won’t be Christians in Iraq.

In 2003, the Christian population in Iraq was 1.4 million but decreased to 275,000 in 2016. In February 2015, Bashar Warda, the Abp. of Erbil, Iraq, testified to the House of Lords, London, on the plight of Christians in Iraq. He said, “For many long centuries, we, the Christians of Iraq, have experienced many long hardships and persecutions, but what we have now experienced are the worst acts of genocide in our homeland. We are facing the extinction of Christianity as a religion in Iraq.”

In August 2014, Chaldean Patriarch Louis Sako remarked, “If the situation does not change, the whole world should take responsibility [for] a slow genocide of an entire component of Iraqi society and its age-old culture. ISIS tries to erase all traces.” The situation has also been dire for Christians in Syria, as a result of the spread of ISIS and the civil war currently raging in that country.

Ibrahim Nseir, an evangelical pastor in Syria, commented in 2016, “We are facing terrorist action in the whole geography of Syria. They are destroying our churches, killing and kidnapping Christians, stealing our homes and our businesses.”

In response to such violence and bloodshed, Mirkis is calling for peace, forgiveness and unity among those of different faiths. In a personal anecdote, he mentioned the compassionate response from a widow of a reporter who was murdered in Iraq. “Instead of seeking revenge, she built a hospital and offered it to those who killed her husband. There’s a lesson that should be repeated,” he said.

In March last year, Secretary of State John Kerry admitted that ISIS has been committing genocide against the Christian community in Iraq. In an official statement, he said:

We know that in areas under its control, [ISIS] has made a systematic effort to destroy the cultural heritage of ancient communities — destroying Armenian, Syrian Orthodox and Roman Catholic churches, as well as blowing up monasteries and the tombs of prophets and desecrating cemeteries. We know that [ISIS] has threatened Christians by saying that it will “conquer your Rome, break your crosses and enslave your women.”