BEIRUT: Confronting the challenges facing Syrian and Lebanese Christians will top the agenda of the new Greek Orthodox patriarch, who will be elected this month to succeed Patriarch Ignatius IV Hazim. At least 18 bishops from Greek Orthodox archbishoprics around the world will meet at the Balamand Monastery near Tripoli before Christmas to elect a new head for the church.

According to officials familiar with the meetings taking place between bishops, the unrest in Syria, its negative repercussions on the Syrian Christian community and how to face them will carry significant weight during the talks.

Bishop Saba Esper of the southern Syria regions of Bosra-Houran, Jabal al-Arab and the Golan was elected as a temporary successor to Hazim at a meeting last week exclusively to organize elections. 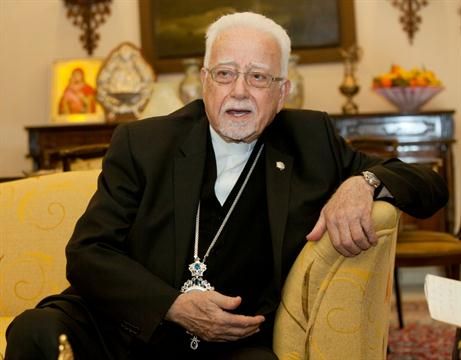 “There is no doubt there are great difficulties in Syria today. What was happening in Lebanon during the Civil War is taking place in Syria,” Bishop Antonio Chedraoui of Mexico told The Daily Star at his residence in Rabieh.

Chedraoui said all bishops were aware of the present challenges and the difficulties facing the Christians in the Middle East. “All bishops are ready to face these challenges in the proper way,” he added.

Chedraoui, 80, has been Mexico’s bishop for the past 46 years and said he had no intention to leave the Americas and become patriarch.

“Mexicans are part of my life. The archbishopric I serve is part of my life and leaving them is not easy,” he added. “But I am a soldier in this church; if the church’s decision is to appoint me as patriarch, then I have to abide by the decision.”

Officials say that Esper, a Syrian, is favored by many to succeed Hazim, who was laid to rest in Damascus earlier this week after serving 33 years as the church’s highest-ranking figure.

Nineteen bishops from Syria, Iraq, Lebanon, Brazil, Mexico, Australia and Europe will meet in Balamand Monastery to elect the new patriarch. Each will nominate three bishops to succeed Hazim.

In a second round of voting, the patriarch will be elected from among the three bishops who receive the highest number of votes from the first round.

The contest is mainly between two groups of candidates: Esper and Mount Lebanon’s George Khodr on one side and Damaskinos Mansour of Brazil and Boulos Yazigi of Aleppo on the other.

However, a compromise could be reached through a fifth name, according to one official.

Bishop Phillip Saliba of North America, who will not take part in the election for health reasons, and Mexico’s Chedraoui could be elected as a compromise measure.

Meanwhile in Beirut, a group of Greek Orthodox Lebanese issued an open letter to the next patriarch, calling on him to tackle the serious dangers facing the community in the country.

The Orthodox Gathering called on the church’s next patriarch to develop a framework that would allow the sect’s religious and lay figures to share decision-making.

“There are clear imbalances in the relation between religious and lay persons … Fixing these imbalances requires active participation from both sides to make us one body under one church,” the Orthodox Gathering said in a statement.

The statement added that the sect was experiencing a dangerous phase that could affect the future of many Lebanese of the Greek Orthodox faith.

“Patriarch Hazim succeeded in bringing peace into the church after all the disputes and disagreements … He united everyone in one person,” Chedraoui said.

The bishop added that the church would continue its productive mission despite Hazim’s passing.

“He will certainly be missed, we are all affected, but the church is not dependent on one person; all bishops are from one family,” he added.

“History has shown that a patriarch’s death does not mean the end of the church’s continuity.”

Asked about the fate of Syrian Christians after the collapse of the embattled Syrian regime, Chedraoui said that Christian presence is in decline in the entire region and not in any particular country.

“Look at Jerusalem, how many of the Christians are still in Jerusalem? Look at Iraq, how many Christians have left Iraq in the past decade?” Chedraoui said.

“The Christian presence is in decline in the entire region, and that’s why we need to remain in our lands and not give up on them … This happens by bringing the church and the people closer to each other.”

“We were from the East and we need to preserve our presence whatever the costs are,” he said.

Criticizing those who are using violence in the name of religion, Chedraoui said that “those who hate have no religion.”

“I have said before, and I say it again, we should be religious because being religious ensures love, forgiveness, not hatred and sectarianism as some are claiming,” the bishop added.

“Religion cannot be used for destruction or murder but for building, love and unity.”