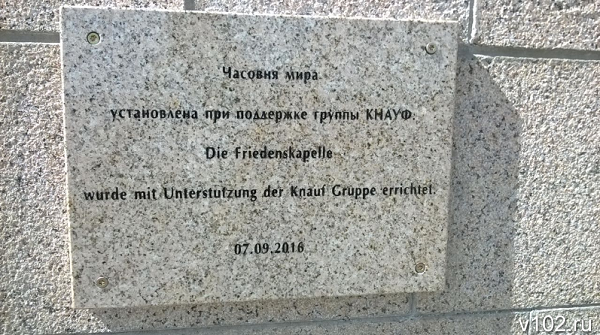 Volgograd, September 7, Interfax – The first in Russia chapel of peace is opened on Wednesday in a military memorial cemetery in the Rossoshki village not far from Volgograd, Interfax correspondent reports.

Ambassador of the FRG to Russia Rudiger von Fritsch participated in the ceremony of opening the chapel.

“At the altar of this chapel we could have written “Never again.” The meaning of this message is that we should remember all victims of World War II. This war started from Germany and eventually had terrific consequences for Germany. Today this thought makes us carry out the policy for the sake of peace, makes us observe international agreements, stick to the rules, not to violate them and carry out irrational policy.

The chapel of peace is made of two granite steles with Orthodox and Catholic crosses.

The military memorial cemetery of the Soviet warriors killed not far from Stalingrad during the Great Patriotic War was opened on August 23, 1997, in the place of destroyed in 1942 villages Bolshaya and Malaya Rossoshki where tens of thousands soldiers and local residents were killed during the war. Today the cemetery consists of two separated parts – German and Soviet.