Source: The New York Times Company
Natalya Mihailova | 09 August 2014
BEIJING — In another sign of the authorities’ efforts to contain one of China’s fastest-growing religions, a government demolition campaign against public symbols of the Christian faith has toppled crosses at two more churches in the coastal province of Zhejiang, according to residents there. 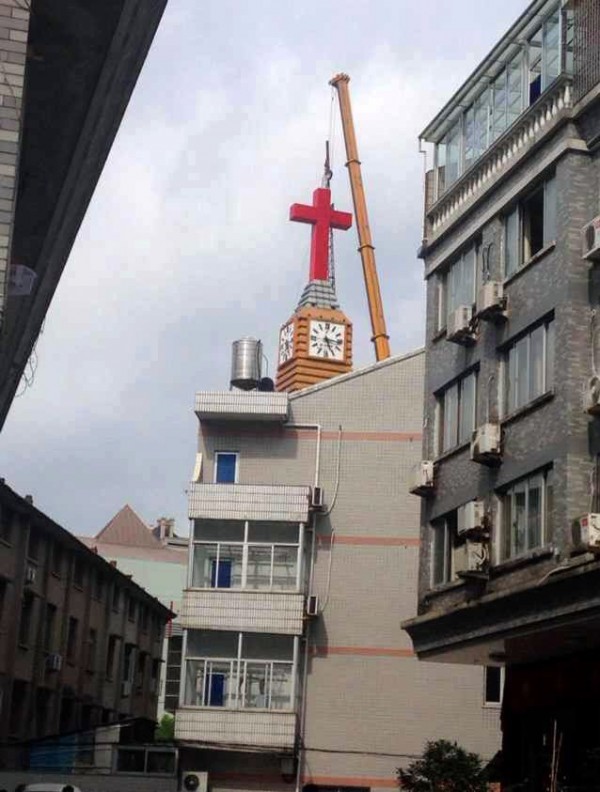 One of the two crosses that were removed on Friday from the Wenling Church in Taizhou in Zhejiang Province, China. Congregants said hundreds of Christians sang hymns as the riot police surrounded the church. Credit Lemon Huang

On Monday, public security officials in the city of Wenzhou used a crane and blowtorch to cut loose the red, 10-foot crucifix that had adorned the Longgang Township Gratitude Church, witnesses said. Unlike in previous confrontations between the police and parishioners that have unfolded in recent months, the congregants did not offer resistance.

“We didn’t want to get in a fight with them, but obviously what they did was illegal,” said the Rev. Qu Linuo, a pastor from a nearby church, who was among the crowd of believers who held an overnight vigil before the police arrived. 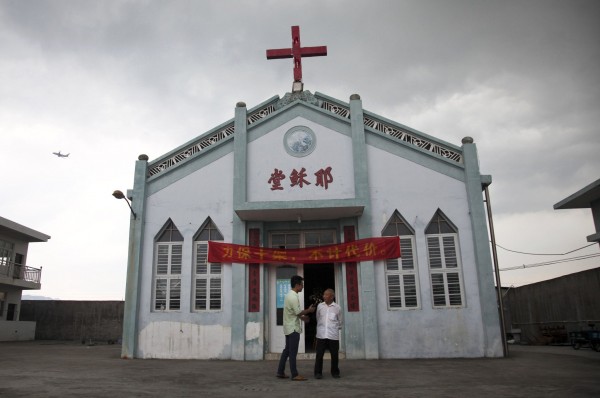 The Wuxi Christian Church in China’s Zhejiang Province. The authorities have issued demolition notices to more than 100 churches in the area. Credit Didi Tang/Associated Press

On Friday, congregants at the Wenling Church in the city of Taizhou faced off with as many as 4,000 police officers but failed to prevent the removal of two crosses from atop their building. One congregant said as many as 40 people were detained during the standoff.

Since early spring, the authorities in Zhejiang Province have issued demolition notices to more than 100 churches, saying their structures violated zoning regulations. Most of the targeted churches are state-approved, in contrast to so-called underground congregations that are frequently singled out by the authorities.

One of the two crosses that were removed on Friday from the Wenling Church in Taizhou in Zhejiang Province, China. Congregants said hundreds of Christians sang hymns as the riot police surrounded the church. Credit Lemon Huang

Officials have been largely taking aim at church steeples and their crosses, but in April the authorities tore down the Sanjiang Church, a highly visible landmark in Wenzhou, saying the entire structure violated building codes. The church, which stood along a highway, had been cited by the local government as a model project.

Church leaders and analysts say the battle in Zhejiang, one of China’s wealthiest provinces, highlights the Chinese leadership’s discomfort with the growing allure of Christianity, whose adherents are said to rival in number the 86 million members of the Communist Party.

The crackdown on Christianity in Zhejiang also coincides with a nationwide campaign that has been directed at legal rights defenders, pro-democracy advocates and liberal online commentators.

Although the government has cited zoning rules in its fight against the churches, a provincial policy paper suggests that there may be other reasons, advising officials to use the zoning language in an effort to avoid international scrutiny.

“This is crucial to investigate and prosecute from the perspective of laws and regulations to avoid inviting heavy criticism,” according to the paper, called a Working Document Concerning the Realization of Handling of Illegal Religious Buildings, which began circulating last summer.

Local officials could not be reached for comment on Monday.

Elsewhere in Zhejiang, one of China’s oldest Catholic churches, built in the 19th century by French missionaries in the coastal city of Ningbo, was gutted early Monday by a fire that reportedly began at the altar, according to the state news media. There were no immediate indications that the fire had been deliberately set, but it was still likely to heighten the belief among Christians that they are under siege.

Across Zhejiang, scores of congregations have organized round-the-clock lookout teams to watch for arriving demolition crews. At Salvation Church in Wenzhou, more than 100 parishioners have been standing sentinel since July 21, when a pitched battle between the police and congregants left more than 50 parishioners injured, some seriously. Although the director of the church, facing intense government pressure, said he would allow the cross to be removed, congregants have vowed to resist.

At the Wenling Church in Taizhou, congregants said hundreds of Christians sang hymns at daybreak on Friday as the riot police surrounded the church, which is anchored by a distinctive clock tower capped by a bright red cross. In a phone interview, one congregant, Lemon Huang, said the show of force was overwhelming and unnecessary. “Some wore police uniforms, with helmets and shields, some were plainclothes police and some wore red armbands — just like the Red Guards during the Cultural Revolution,” Ms. Huang said.

After a daylong effort that required a towering crane and an electric buzz saw, workers removed the church’s two crosses and carted them away.

A similar scene unfolded on Monday at the Longgang Township Gratitude Church. Mr. Qu, the pastor from the nearby church, said about 200 people, some in their 70s and 80s, who were holding a vigil in front of the church ultimately stepped aside to allow the police to move when they arrived with a bulldozer.

After more than two hours, the cross was lowered by crane and handed over to the parishioners, who carried it back into the church. “Many of them were weeping inconsolably,” Mr. Qu said.