Source: RIA Novosti
Natalya Mihailova | 17 September 2014
MOSCOW, September 16 (RIA Novosti) - Christians in eastern China have come out to protect the symbol of their faith on the top of the Christian church in Pingyang County in Wenzhou in a standoff with the local authorities planning to forcibly remove the cross, CNN reported Tuesday. 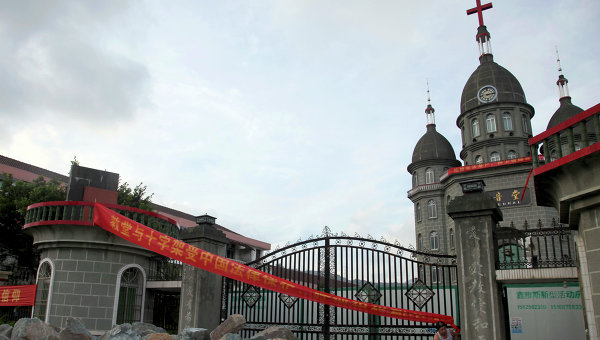 “If I have to, I am going to hold it in my arms and protect it,” CNN quoted an elderly man as saying Tuesday, who added, “They have no right to tear it down, that is why we have to defend our church.”

“What the government here is doing is so barbaric, they’re like bandits and we are furious with them,” Chen Zhi’ai, a respected church leader in the Wenzhou area, said Tuesday, CNN reported. “Today we’ve seen the fundamental symbol of our faith violated and it hurts us deep inside our hearts.”

Wenzhou is a coastal Chinese city nicknamed the “Jerusalem of the East” for its large Christian population. Throughout the past year local Communist Party authorities have demolished scores of churches and have forcibly removed more than 300 church crosses. Local officials claim that the demolished churches were illegal structures exceeding the permitted structure size four times. Denying the crackdown on Christianity, they assert the demolitions are part of a broader campaign targeting illegal structures in the province.

Church leaders view the government’s campaign as a fight against “Western culture,” of which Christianity is considered to be a part of.

Christianity in China has been growing rapidly in the past few decades. CNN reported that according to the estimates by Fenggang Yang, the director of the Center on Religion and Chinese Society at Purdue University, Indiana, in a few years China would have more Christians than Communist Party members, which stood at more than 85 million at the last count. And in just 15 years, China could overtake the United States as the country with largest Christian population in the world