Source: DECR
Natalya Mihailova | 07 March 2015
The Chinese version of Metropolitan Hilarion’s book ‘The Sacrament of Faith’ has come out. It has been prepared by the Orthodox Brotherhood of Ss Peter and Paul in Hong Kong. The translation was made by Ling Seng, a young expert in Russian language and literature who studies at the extramural department of Khabarovsk Seminary. 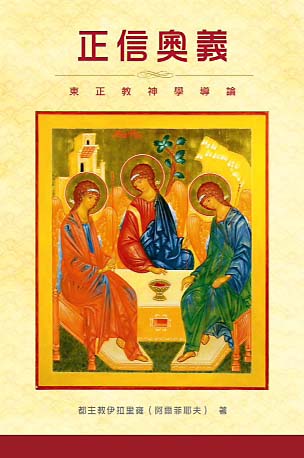 The book has been published by the China Orthodox Press publishers. It will be available for the Chinese reader in the format of traditional hieroglyphs both in paper and in electronic writing at the publishers’ shop.

Metropolitan Hilarion’s book ‘The Sacrament of Faith’ first came out in 1996. Its Russian edition has been republished nine times. The latest, tenth, edition translated into Chinese was published by the Moscow Patriarchate Publishers in 2013. The book is translated into the English, French, Italian, Spanish, German, Greek, Ukrainian, Bulgarian, Macedonian, Georgian, Romanian, Finnish, Swedish and Japanese languages.

The Orthodox Brotherhood of Ss Peter and Paul has been engaged in publishing books on Orthodoxy for some years. Concurrently, the work to publish Orthodox books in Chinese is carried out by the Moscow Patriarchate’s department for external church relations.

On the occasion of the 325th anniversary of Orthodox in the Celestial Empire in 2010, the DECR, the Far East Institute of the Russian Academy of Sciences and the Russian-Chinese Business Council prepared the book ‘Orthodoxy in China’. Richly illustrated, its Russian and Chinese versions describe the emergence and formation of Orthodox culture in China. On September 27, 2010, during official visit of Russian President Dmitry Medvedev to the CPR, a copy of this book was presented to Chairman Hu Jintao, and on November 23, 2010, Russian Prime Minister Vladimir Putin presented a copy of this book to Chairman of the State Council Wen Jiabao.

On the basis of this book, Metropolitan Hilarion produced his documentary ‘Orthodoxy in China’, which came out in 2013 to time to Patriarch Kirill of Moscow and Russia’s visit to China.

On the occasion of the first ever visit to the Celestial Empire by the Primate of the Russian Orthodox Church, the Chinese version of Patriarch Kirill’s book ‘Freedom and Responsibility: In a Search for Harmony. Human Rights and Dignity’ was prepared with the support of the Russian-Chinese Business Council. The book was presented on May 12, 2013, in Beijing. His Holiness Patriarch Kirill presented a specially prepared copy of this book to PCR Chairman Xi Jinping in the course of their meeting on May 10, 2013.