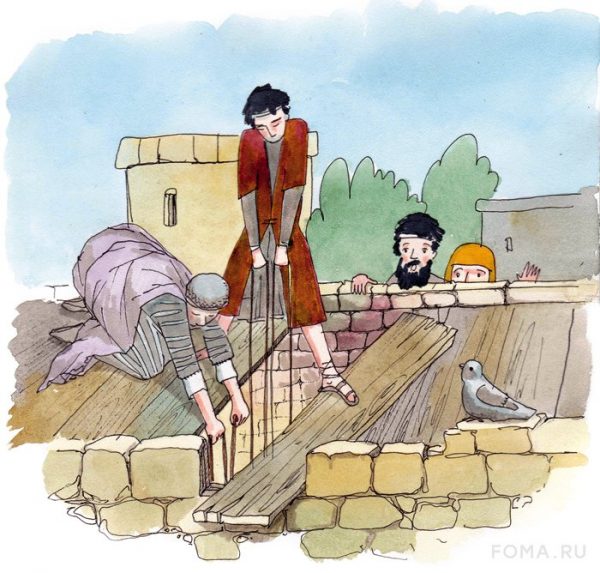 Today’s Gospel reading from Matthew (9:1-8) recounts an event of forgiveness and healing by Jesus. This event is narrated by Mark in greater detail (Mark 2:1-12). Christ was at a home, teaching God’s word. The house was crowded and hardly anyone could enter. Four men appeared carrying a paralytic on a pallet. What could they do to bring the ailing man before Jesus? Somehow, they cleverly managed to make an opening in the straw roof. They raised up the pallet and let it down safely in front of Jesus. Everyone was startled and Jesus too was amazed. “Seeing their faith,” He said to the man, “take heart, my son, your sins are forgiven.”

“Seeing their faith.” Jesus marveled at the faith of those ordinary men. What faith? Theirs was not a highly intellectual or theological faith. It was a simple trust that their friend would be healed by Jesus, if they could only reach the Lord. It was the determination, the grit, and the resourcefulness to accomplish the good deed they had set out to do. Determined and resourceful, they did not give up when it appeared impossible to squeeze the pallet through the front door. They needed ladders to get up to the roof, or perhaps they climbed on it from the porch of an adjoining house. They needed ropes and found them. They deftly took apart the roof knowing that afterwards they would have to repair it or pay for the damage. They did everything they could to bring their friend to Christ, and He was amazed by their faith.

Christ wants us to be faithful, determined, resourceful, even shrewd, in seeking Him out and in doing His work. In the Parable of the Dishonest Steward Luke 16:1-8), Christ tells the story of the household manager who was about to be fired because of wastefulness. The steward, who now faced poverty, cooked up a clever plan. He summoned his master’s debtors, changed contracts and lowered their costs, in order to receive kickbacks later. Christ praised the steward not for his dishonesty but for his shrewdness in implementing his unethical goal. And indirectly Christ critiqued His own followers by saying that the sons of this world, the unbelievers, were often more shrewd in dealing with their own things than the son of light, the believers in dealing with their things (Luke 16:8). Christians are to engage the contest of life without lapsing into the deceits and intrigues of this world. Nevertheless, according to Christ, they ought to use the utmost sagacity and wisdom in achieving their aims and goals. Christ once said: “I send you out as sheep in the midst of wolves; so be wise as serpents and innocent as doves” (Mat 10:16).

What is this lesson? It is to be faithful, tenacious, resourceful, even shrewd in doing the most blessed work of the salvation of souls. There are neighbors and friends to be helped. There are former parishioners and relatives to be re-connected to the Church. The life of the parish has countless opportunities to do God’s work through worship, teaching, administration, caring, visiting and serving. And I know you do many of these things. We cannot sit back and wait; nor should we be easily put off by difficulties. We can take the initiative, be inventive and creative, both in small and big things. The horizon of Christian mission is wide open. Presently our nation is suffering from a resurgence of the epidemic because of the more contagious strand of the virus. Friends and family members are among the best persons to converse and convince each other about vaccination and appropriate mask wearing as the most effective and least dangerous options in the fight against the virus. Little things count. An encouraging word, a kindly gesture, a simple act of helpfulness can spark flashes of God’s kingdom in our midst here and now. Little acts of grace can generate feelings of compassion and solidarity among us where God’s love and grace may abound.

“Your sins are forgiven,” Jesus said to the paralytic. Did the man’s sins cause his paralysis? Not necessarily. Jesus did not mean to imply that there is a necessary connection between sin and sickness. Nor does the Bible teach that the righteous always flourish, while sinners always become sick. On the contrary, the burning question for the Bible is: why do the righteous suffer, while sinners prosper? However, people in the days of Jesus, as some people even today, closely associated sickness with sin. Quite likely, the paralytic himself and his friends did the same. And, of course in any case, all of us have sins of one kind or another that need to be forgiven by God. So, Jesus, offering encouragement and comfort to the paralytic, said to him: “Take heart, my son; your sins are forgiven” (Mat 9:2).

Jesus healed the man’s inner paralysis. He then blessed him with physical healing too, saying, “Rise, take up your pallet and go home.” Jesus gave the same powers of forgiving sins and healing the sick to His disciples (Mat 10:8; John 20:23). The Church continues to practice these gifts of forgiveness and healing through our sacraments and prayers. Christians too should pray for forgiveness and healing for themselves and others. We read in Scripture: “Confess your sins to one another and pray for one another that you may be healed” (Jam 5:16). We should pray for these gifts with faith and good judgment, trusting in God and committing all things to His grace.

Not everyone was happy about Jesus’s gift of forgiveness. “Blasphemy!” said the religious leaders to each other. They knew as they had been taught that only God possessed the prerogative of forgiveness, and that occurred at the Temple, the house of the holy presence of God. There the priests offered sacrifices and prayers throughout the year for the forgiveness of sins. In particular, Yom Kippur, the Day of Atonement, was the holiest day of the year, on which each year the people of Israel were granted full forgiveness and peace with God. Who was this Jesus of Nazareth, the son of Mary and Joseph the carpenter, who had no family lineage of priesthood, and did not serve as priest at the Temple? Who was he to claim God’s attributes and to forgive sins?

The good news of the gospel, and the whole controversy which eventually led to the Cross, was exactly this question of the identity of Jesus as the Christ. The Book of Daniel looked forward to a day when the Son of Man, God’s heavenly agent, would be crowned by God to carry out God’s work of salvation (Dan 7:13-14). Jesus claimed that authority when He healed the paralytic, saying: “That you may know that the Son of Man has authority to forgive sins . . . Rise, take up your pallet and go home.” Jesus’s divine power working to heal the paralytic testified to His divine authority to forgive sins as He had done in the case of the paralytic.

Here, sisters and brothers, we touch on the core of the Christian faith and its blessings. The center and essence of the Christian faith is Christ Himself. Christ claimed to be the new Temple of God, the holy place where people could meet and embrace the full presence of the living God on earth (John 2:19-22). Christ is Emmanuel, “God-with-us” (Mat 1:23). He forgave sins and healed the sick during His earthly ministry. At the end, He offered Himself as an eternal sacrifice on the Cross once-for-all for the forgiveness of sins. He became the new Passover lamb, the lamb of God sacrificed for the forgiveness of sins, an eternal High Priest for all humanity. This is the New Covenant in His most sacred Body and Blood, which we celebrate at every Divine Liturgy.

Because Christ was who He said He was, and because He did what He did, becoming our High Priest and eternal intercessor before God, we have the assurance of unending forgiveness. Christ is our wisdom, our righteousness, our sanctification, our redemption (1 Cor 1:30). We have the assurance that each time we kneel before His icon and ask for forgiveness, that he freely and generously forgives us until our last breath on earth. We ought not to sin, of course, but if we do sin, we have Christ as an unceasing advocate, the expiation of our sins, before the Father (1 John 2:1-2). We read in the Scriptures: “God shows His love for us in that while we were yet sinners Christ died for us” (Rom 5:8). And again: “In this is love, not that we loved God [first] but that He loved us and sent His Son to be the expiation of our sins” (1 John 4:10).

How should we respond to all of God’s blessings in Christ? With gratitude, praise, and devotion to Christ’s work in the world. The Book of Hebrews says: “Let us hold fast the confession of our hope [in Christ] without wavering. Let us consider how to stir up one another to love and good works, not neglecting to meet together, as is the habit of some, but encouraging one another, and all the more as [we] see the Day [of the Lord] drawing near” (Heb 10:23-25).

Glory be to the Father and to the Son and to the Holy Spirit, now and always. Amen.