Christ is Risen! Well, So What?

After all, despite the glory of Pascha, I am still an unrepentant sinner. I am worse than St. Thomas because he touched the Lord’s flesh once and proclaimed, “My Lord and my God.” Eventually, Thomas made it all the way to India. I touch the Lord’s Body and Blood every Sunday and have done so for over 12 years, and I’ve hardly made it out of my house.
Archpriest John Moses (+2019) | 30 April 2011

It’s the greatest message that humanity has ever heard.

Its also the most ignored message in the world.

I look out in the post-Pascha world and little has changed. The war goes on, gas prices continue to rise, and the rats are still running the race. A poor woman was just found in a basement with her children, and she had been a prisoner there for 25 years. Christ is risen. You might think it impious of me, but I must ask: Well, so what?

It’s one of the most amazing and perplexing passages of Scripture. “Then the eleven disciples went away into Galilee, to the mountain which Jesus had appointed for them. When they saw Him, they worshiped Him; but some doubted.” (Matthew 28:16-17, NKJV) 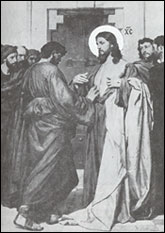 After all, despite the glory of Pascha, I am still an unrepentant sinner. I am worse than St. Thomas because he touched the Lord’s flesh once and proclaimed, “My Lord and my God.” Eventually, Thomas made it all the way to India. I touch the Lord’s Body and Blood every Sunday and have done so for over 12 years, and I’ve hardly made it out of my house.

So, maybe the world ignores the greatest message of all time because the witness of my life is that He is still dead and I remain a slave to sin. Why does the stone remain over the tomb for me? What power keeps the stone from rolling away?

In Hebrews, chapter 2, it says, “…through death He (Jesus) might destroy him who had the power of death, that is, the devil, and release those who through fear of death were all their lifetime subject to bondage.”

Now, this is interesting. So, it is the fear of death that binds me and blinds me and makes me a slave to sin. Well, I don’t spend most of my day worrying about my physical death, but I do worry about a lot of things. Yet, I thought it was the fact that sin was fun or pleasurable that bound me to it. No, to be honest, beneath it all is fear. As I think about the Lord’s life, how many times did the angels say, “don’t be afraid?” How many times did the Lord Himself say, “Be not afraid?” Am I afraid, really?

For example, I live to eat, not eat to live. Why do I eat so much? Am I afraid that I won’t get enough to eat? Perhaps, its because deep in my heart I am afraid-maybe I’m not really loved; maybe I’m ugly; maybe I really am a failure. I find I can eat and kill the this hunger and pain in a carbohydrate haze. After all, a bag of Oreo cookies and a tall glass of cold milk can make me feel real good.

Another example is that I judge others because it makes me feel superior to them. I need to feel superior because I am afraid that people will see what an utter fool I really am. I know exactly why the Pharisee was glad that he was not “like that man.” I’m glad too because it eases the fear that I am a fool and hypocrite. Afterall, I can’t be too bad when there are so many people who are obviously more sinful and more foolish than I.

I could go on and on, but I think you get the point. Fear permeates every aspect of life and it lies at the foundation of every habitual sin that plagues us. It was that way for our Parents. When Adam and Eve broke God’s commandment, they hid in the bushes because they were afraid. When you think that previously they had “walked with God in the cool of the evening”, how sad that they hid themselves from their Father. In the Icon of the Resurrection, Adam and Eve come from the shadows with great joy. Yet, some still hide in the semi-darkness.

Like Adam and Eve, I’m hiding because of fear, and it’s fear that binds me. Even though I proclaim with my lips, Christ is Risen, my heart is wrapped in chains. Is there no help?

Orthodoxy proclaims that Christ “trampled down death by death and upon those in the tombs, He bestowed life.” By trampling down death, he destroys the binding power of death, which is fear. He defeated the one who wields this power, the devil. This means that my fears, though real to me, have no real power. To know this, I have to be willing to open the dark corners of my soul to the light of the Resurrection. One way that I begin to do this is by confession which allows me to begin to come out from my hiding place in the bushes.

I remember hearing this story when I was young. Apparently, almost 10 years after World War II had ended, a lone Japanese soldier was found on a small island in the Pacific Ocean. He had spent a decade believing that the war was still going on, and so he stood his post and every day watched for the enemy.

I’m just like that poor soldier. Christ has won the war and the enemy has been defeated. The problem is, I haven’t heard the good news yet. Well, I’ve heard it, but I just don’t believe it. Lord, I believe, help my unbelief.

The President was right-”There is nothing to fear but fear itself.” John the Revelator heard it from the Lord- “Be not afraid…I hold the keys of Death and Hell.”

Truly He is Risen!