Source: RT
Natalya Mihailova | 29 May 2014
A group of Orthodox Christian activists claim that they have gathered 100,000 signatures under a petition seeking to completely ban abortions in Russia – a number enough to make it a valid legislative initiative. 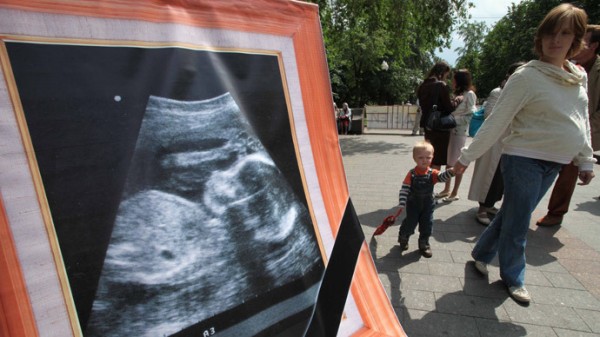 In the near future all the documents will be submitted to the authorities and the activists will be waiting for an official reaction to their demands, a member of the Public Chamber, priest Aleksander Pelin was quoted as saying by the ITAR-TASS news agency.

The leader of the activists, Dmitriy Tsorionov elaborated on the initiative, and said that it seeks a complete legislative ban on all abortions, including those made on medical advice and on all abortive means of contraception, such as intrauterine devices and hormonal pills. Tsorionov said his group was not protesting against barrier contraceptives, such as condoms.

According to Russian Law any petition that gathers at least 100,000 signatures of support becomes a draft law and must be considered by parliament. The signatures must be gathered on the special government portal and come from registered Russian citizens. People can also vote against the initiatives on the same portal, but the votes against do not influence the documents’ movement, at least technically.

Since the scheme was introduced in March last year only three initiatives have reached the 100,000 signature threshold. The first suggested a price limit for cars purchased by state agencies, and the second called to abolish a new law targeting internet piracy. They were rejected at the first stage. The third sought changes in the rules of self defense favoring the gun lobby, and it is still being considered by an expert group.

Abortions are legal in Russia and have been since Soviet times, but currently centrist-conservative lawmakers want to limit or completely ban them, saying it is partly responsible for the country’s dwindling population.

The head of the parliamentary committee for family, women and children, Yelena Mizulina told a recent parliamentary conference that the number of teenage abortions in 2013 was almost 12,000 and there were serious fears that many of the girls could be left infertile forever. The MP blamed the current Family Code and the Law on Healthcare for the situation, in particular the rule that allows abortions without parents’ consent from the age of 15.

The total number of abortions in Russia is about one million per year, according to Deputy Health Minister Tatyana Yakovleva.

The move gained little support from other politicians and shortly afterwards Mizulina played down her statements saying that she wanted to draw attention to the problem and start a discussion, not introduce any legislative limitations.

Most viewed articles
Metropolitan Hilarion Speaks on Whether It Is Possible for ROC to Reunite with Old-Believers240
Last Man Standing179
The Temple of Woke: Are Universities Basically New ‘Religious’ Training Centers?132
Businessman Buys a 19th Century Church and Returns It to the Faithful91
Turning Trials Into Hope71
Metropolitan Onuphry: People Get Strength for Life and Salvation in the Church64
Russian and Arabian Clergymen Celebrate the Memory of Prophet Elijah in Israel55
Did God Really Order a Genocide?25
Most popular authors
Pravmir.com team450
Archpriest Geoffrey Korz180
Eric Hyde132
Fr. James Guirguis71
Archpriest Lawrence Farley27