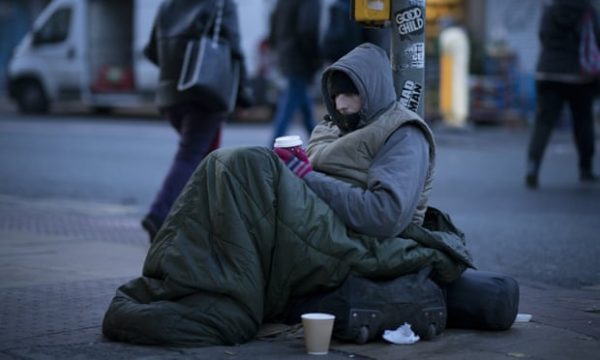 The Salvation Army has set up a series of ‘pop-up’ shelters for homeless people in anticipation of Storm Ciara.

The Met Office has issued a yellow weather warning for wind covering the whole country on Saturday and Sunday, as the third named storm of the season approaches. Winds of up to 80mph are expected.

The Salvation Army has arranged more than 250 spaces available in churches and Salvation Army Lifehouses (hostels) so that rough sleepers can find a safe, warm place to stay for the night.

The Salvation Army’s assistant director for homelessness, Malcolm Page, said: “Our ‘pop-up’ shelters offer an extra layer of protection to rough sleepers – a safe warm space to shelter can be the difference between life and death at this time of year.

“On the streets they are extremely vulnerable and risk death due to exposure to harsh weather conditions. Rough-sleepers face multiple challenges in their lives – such as domestic violence, mental ill health, childhood trauma or addiction – that led to them losing their home. A place in a shelter can be the first step towards tackling these issues.

“The Met Office is warning people to stay inside and not to shelter or walk close to buildings and trees. When you are without a home, this is impossible. Finding a safe shelter can be tough whatever the weather but even more so when extreme weather hits. The Salvation Army stands ready to offer protection in the storm.”

According to forecasters, there will be “impacts across the whole of the UK” between 6pm on Saturday and midnight on Sunday.

Met Office meteorologist Grahame Madge described the weather front as “Ciara rather rudely barging her way through”, taking conditions from “rather benign” to “very unsettled”.

He also warned of the risks of “coastal flooding, large winds across sea fronts” as well as possible bridge and road closures.

Page added: “While we are braced to offer emergency support in addition to our network of temporary night shelters, we know that rough sleeping has increased by 165 per cent since 2010 and a temporary shelter alone cannot tackle homelessness in our towns and cities.”

The Salvation Army has urged the UK Government to make eliminating rough sleeping by 2024 a priority and invest in supported housing which provides a home but also services to tackle the root causes of homelessness.

The charity also called for the Government to provide targeted investment so local authorities properly fund localised support for homelessness.