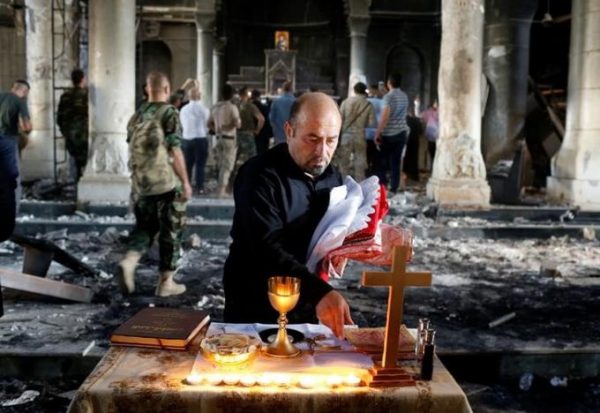 Three major church groups have banded together to form a committee that aims to rebuild the communities that were devastated by the Islamic State terror group in Iraq.

The Syriac Catholic Church, the Syriac Orthodox Church, and the Chaldean Catholic Church have formally established the Nineveh Reconstruction Committee (NRC), which is tasked with planning and supervising the rebuilding of more than 12,000 damaged or destroyed houses.

“Today we are truly a united Church – Syriac Orthodox, Chaldean and Syriac Catholic – united in the work of rebuilding these houses on the Nineveh Plains and in restoring hope to the hearts of the inhabitants of these villages and inviting those who have left them to return,” Syriac Orthodox Archbishop Alshamany said, as reported by Assyrian International News Agency.

The Catholic charity Aid to the Church in Need (ACN) has estimated that the rebuilding of the homes would cost at least $213 million. The charity said that it will be closely following the committee’s initial operations and will help with the advocacy and fundraising efforts.

Alshamany thanked ACN for its role in developing the initiative. “We would like to thank ACN, which has helped us so much in the past, by providing help and food. Now this charity is playing a crucial role in the rebuilding of our houses,” he said.

The committee is composed of two representatives from each of the three churches and three external experts suggested by ACN.

The signing ceremony was held at the Chaldean Archdiocese of Erbil, where many of the 100,000 Christians resettled after they were displaced by the ISIS invasion in August 2014.

Syriac Catholic Archbishop Yohanna Petros Mouche of Mosul encouraged Christians who were living in the Nineveh Plains to return to their homes. He noted that the churches’ efforts to join together demonstrate their willingness to accelerate the operation to rebuild the communities.

Iraqi forces backed by a U.S.-led international coalition have liberated several cities as well as eastern Mosul from ISIS last year. The security forces are currently locked in a battle to recapture western Mosul.

The ancient city of Qaraqosh, which was liberated last year, was leveled to the ground by the war, but the residents have hope that the land will be restored by God.

Professor Ryan Mauro, a national security analyst at the Clarion Project, said that the residents who paid a visit to the city “were adamant that their faith is even stronger than it was before and vowed to reopen the burned church and fill it with an even bigger crowd than before.”

Most viewed articles
Patriarch Kirill: Not Only People, But Churches Too, Can Depart from God220
A Christianity of the Catacombs183
The Truth About Riches114
Thoughts on Theophany and Revelation105
Archbishop Makarios of Australia: ” the Great privilege of the Orthodox Church is that we live in communion”69
Metropolitan Onuphry Speaks on How to Protect One’s Soul From Sin54
Most millennials, Gen Z adults support bans on abortions when baby’s heartbeat is detected: poll29
The Muskox Response To COVID-194
How to live the Spiritual Life (Part I)1
Most popular authors
Pravmir.com team372
Archpriest Lawrence Farley183
Fr. Gabriel Bilas114
Elissa Bjeletich105
Archpriest Michael Gillis4