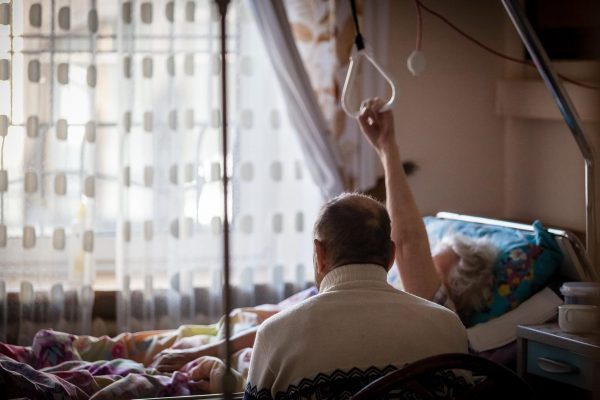 In the old days, she would be propped up on a comfy pillow, in fresh cleaned sheets under the corner window where she would in days gone past watch her children play. Soup would boil on the stove just in case she felt like a sip or two. Perhaps the radio softly played Al Jolson or Glenn Miller, flowers sat on the nightstand, and family quietly came and went. These were her last days. … spent with familiar sounds, in a familiar room, with familiar smells that gave her a final chance to summon memories that will help carry her away. …

You see, that’s how she used to die.

The essay is entitled “I Know You Love Me; Now Let Me Die” I saw it on Facebook, handed around the way that we do everything from meatloaf recipes to the greatest speeches in history, with the result that everything has the same value.

But considering the topic, I feel like this one deserves to come with a big label that says, “Read this. It actually matters.” The physician author of this article has first-hand knowledge of just what death looks like in the modern hospital room or elderly care facility. He approaches it from the medical professional’s point of view, and considers what happens to the theoretical dying woman whose gentler, old-fashioned death he sketched above. But these days…

She can be fed a steady diet of Ensure through a tube directly into her stomach and she can be kept alive until her limbs contract and her skin thins so much that a simple bump into that bed rail can literally open her up …. She can be kept alive until her bladder is chronically infected, until antibiotic resistant diarrhea flows and pools in her diaper so much that it erodes her buttocks. The fat padding around her tailbone and hips are consumed and ulcers open up exposing the underlying bone, which now becomes ripe for infection.

I know these aren’t pretty things to talk about. But I have seen some of this first-hand; I think quite a lot of people my age have. When my father-in-law was in decline, he received end-of-life care that went on for about three years. When I blogged about it back in March 2014, in spite of the excellent hospice care Charles received, I had to ask:

Is this really the best we can do for Greg’s dad? Charles is on “palliative care,” and so the only medical concern is limiting suffering. But is an unsuffering death really possible? And if it is, am I wrong to think that it’s just not what I would want for myself?

… if it were my time to go, and I could see that it would be this creeping, sanitized kind of yearlong journey with caretakers trying to keep every little thing operating as if I were just a collection of little things … would I be just crazy to say that I’d like to opt out? …Wouldn’t I rather have a short end punctuated by intense focus than a protracted fugue state with no intensity and no humanity?

We go through it with our elderly parents and we have no way to change the current practices. But I hope that by the time I get there, enough of us will have spoken up to say that just because we CAN keep bodily functions going at maximum cost with maximum artificiality doesn’t mean we SHOULD. Because we aren’t just pumps and springs and tubes — we’re human beings made in the image of God.

We pray for “a Christian end to our life — painless, blameless and peaceful.” But what does that really look like? Can’t we see out our days better in the quiet corner that the author places his patient in than in the sterile, hopeless hospital beds that most of us are bound for?

What is “a Christian end to our life?” I really want to know.

St. Mary of Egypt and I go way back. It doesn’t feel like it sometimes. It feels like…