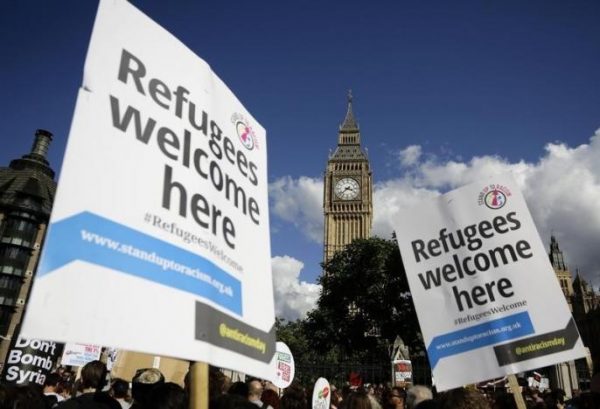 Protesters hold up placards during a demonstration to express solidarity with migrants and to demand the government welcome refugees into Britain, in London, September 12, 2015. REUTERS/Kevin Coombs

Sarmad Ozan, a deacon of a church in Mosul, has filed an appeal to the British Home Office after his application for asylum in the U.K. was denied. Before the next scheduled hearing of his appeal, Ozan shared how life was like during the first few weeks of ISIS’ (Islamic State of Iraq and Syria) takeover of Mosul in Iraq.

In an interview with RT, Ozan recounted that on June 10, 2014, the Iraqi Army had forbidden people to go out of their homes because of a state of emergency. The army later announced that ISIS had taken over Mosul.

“Everyone fled Mosul during the night,” Ozan said. “All the families drove their cars to the nearest city or anywhere. We went to a monastery near Mosul. We stayed there for about two weeks,” he added.

He stated that ISIS did not start killing people immediately but they threatened to kill Christians if they did not convert to Islam or pay jizya, a tax imposed by Islamic states on non-Muslims. Christians who decided to leave Mosul were robbed and dragged out of their cars at ISIS checkpoints.

Ozan explained that the Kurds who fought against ISIS did not welcome Arab-Christians either.

Ozan, 25, recalled that life as a Christian in Iraq was easier in 2003. He referred to the situation of Christians in the country as a “slow motion genocide.” He estimated that 10 people are killed each day.

The Home Office denied Ozan’s application for asylum, stating that he can just return to Kurdistan or Baghdad. Ozan’s brother was granted asylum in the U.K. in 2010 after bombs were planted outside his home in Mosul.

Ozan has a degree in engineering from the University of Mosul. He got a scholarship from the Iraqi government to obtain his masters degree in the U.K. but funding for his education stopped after the violence in Iraq intensified so he is now applying for asylum.

A total of 43,381 refugees are expected to have applied for asylum in the U.K. this year.