Source: Voice of the Martyrs, Korea
He was forced out of the village and now he lives with his family in a house-church.
Pravmir.com team | 07 December 2021 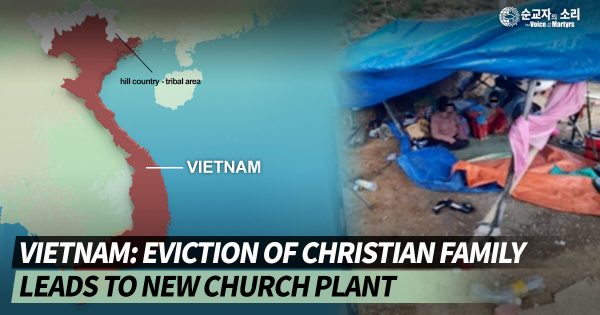 In the mountainous region of Vietnam, Christian Tôn Thành Sang* (name has been changed by the press service of the human rights organization Voice of the Martyrs Korea) suffered a broken arm for refusing to hand over his Bible. Later he was forced out of his native village and now, together with his family, he lives in a house that also serves him as a church.

“Brother Tôn is a first-generation Christian,” says Voice of the Martyrs Korea Representative Dr. Hyun Sook Foley. “He and his family came to Christ through a local pastor last year and immediately began to experience persecution. Tôn even suffered a broken arm when he refused to surrender his Bible to villagers who attacked him on his way home from church.” In Vietnam, Christian persecution is most severe in the remote tribal areas in the highlands.

But Representative Foley says it was Tôn’s witnessing to other villagers, which ultimately led several to convert to Christianity, which drove his brother-in-law to take action. “Tôn’s brother-in-law conspired with the village chief to have the family evicted from their home,” says Representative Foley. “It is one of the most common forms of persecution against Christians in the Vietnamese highlands.”

Left with no other options, Representative Foley says, Tôn and his wife and their two small daughters moved into a tent on a patch of farmland near their village.  “His phone had been taken away from him, and it was too dangerous for him to return to the village, so he couldn’t contact anyone from his church to let them know where he was,” says Representative Foley. “But when Tôn’s pastor visited his former home and found that the family had been chased out, he began to search for them.”

According to Representative Foley, when the pastor found Tôn’s family, he realized there was little hope they could return to their home or village. “The pastor saw it as God’s design, since there was currently no church in that area,” says Representative Foley. “He offered to help them build a place to serve as both a home and a meeting place for a church, and they began church services in the small tent there even before construction got underway.”

New Christian Tôn Thành Sang participates in the construction of a new home for his family, which will also serve as a church meeting place.

The tent of the Tôn family following their eviction from their home in the Vietnam highlands, due to Christian activity.

Representative Foleys says Voice of the Martyrs Korea will be providing an additional 15,000,000 KRW in aid to persecuted Vietnamese Christians this month. “The funds come from donations to our ‘Families of Martyrs and Prisoners’ fund and our ‘Communism is Not Dead’ fund,” says Representative Foley. She says the funds allow Voice of the Martyrs Korea to quickly deploy emergency support to persecution hotspots.

According to Representative Foley, Vietnam is currently one of the hottest. “We are seeing frequent persecution of Christians in the Vietnamese highlands,” she says, “These days imprisonment is rare, but village expulsion, property confiscation and destruction, and physical attacks are quite common.”

But Representative Foley says that persecution has not discouraged Vietnamese believers but instead has driven them to prayer and deeper faith in God. She offered a thank-you letter from Tôn as an example.

Tôn wrote: “… while we were facing trials and having no place for my family to stay, my wife and I did not know what to do except to pray for days and nights. God sent our pastor, who came to visit us and let us know we would be receiving money from the benefactors to help us build our house… We were astonished and praised God for His provision.”

Voice of the Martyrs Korea classifies Vietnam as one of five remaining Communist nations in the world, including also China, North Korea, Laos, and Cuba. “Each of these nations maintains strict laws against religion,” says Representative Foley. “In Vietnam, new Christians are often evicted from their homes and villages, especially in the tribal areas where local authorities exercise broad discretion.” Representative Foley says that in the rural and tribal areas, existing believers can often meet openly, but new believers are targeted for harsh persecution. “Christians are often denied social services, utilities and schooling in an attempt to pressure them to reject Christianity.”

“Christian persecution is not a thing of the past in the Communist world,” says Representative Foley.

More information on Christian persecution in Vietnam is available at https://vomkorea.com/en/country-profile/VIETNAM/.