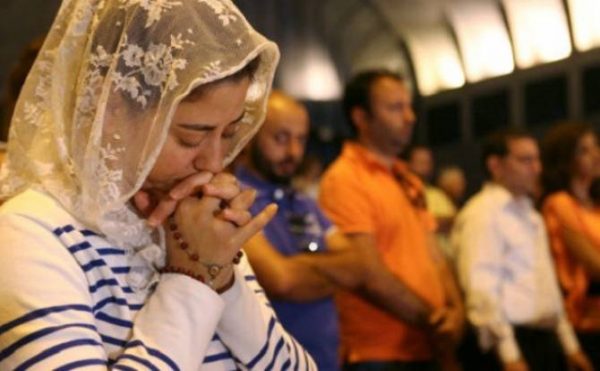 There has been a spike in kidnappings and disappearances of Christian women and girls in rural areas of Egypt and some cities.

“What seems to be happening is that a trafficking strategy that targets Coptic Christian young ladies and forces them to convert to Islam then sell them into either into domestic care in other international locations or into the sex trade,” Open Doors’ David Curry says.

Curry shares these kidnappings are being used as a tactic to demoralize the women and to humiliate the Christian community.

According to World Watch Monitor, there were seven kidnappings of Coptic Christian women in the month of April and an eighth one on May 2. The families of these women suspect they have been kidnapped by Muslims.

One of the girls who was kidnapped, Mirna Malak Shenouda, a 16-year-old Coptic Christian girl, escaped her kidnappers.

World Watch Monitor reported she was kidnapped by two women and a man in Aswan. She had been knocked out but awoke on a train. At one of the stops, she jumped off and called her parents.

However, Shenouda’s escape and rescue are rare.

Many families of the missing girls have turned to police after disappearances, but have received minimal to no help due to religious prejudices.

“One of the challenges then has been a very uneven… sense of justice when these cases are reported to the local police.”

Curry shares in one case, after the family reported to the police, they returned to the station for updates and the police stated the woman had come into the station, said she was not missing and had willingly converted to Islam.

The family says they do not believe she would ever willingly convert to a different religion as she loves God.

However, the local police will not investigate this case or similar cases any further.

“They don’t seem to be responding to the concerns of the Christian community,” Curry says.

“We don’t suggest that it’s the national government, but these are all independent police stations. These are rural communities in many cases. And, we expect the Egyptian government to send [a] clear signal to these police departments that justice should be evenly distributed amongst the minorities and majority population. It should not be that if somebody is kidnapped just because they’re Coptic Orthodox Christian, that their case is not considered as equal as somebody else.”

Curry says President Abdel Fattah el-Sisi and the central government have helped a great deal in swaying religious prejudices of believers in Egypt.

President el-Sisi has spoken up for believers and even participated in their significant religious holidays as a way to support them.

“The government is recognizing, I think, on a national level, the importance of Coptic and Christian communities there and so, that is [a] significant benefit. And, Egypt has a young, strong Church that is excited to share their faith and live their faith publically and be good citizens in Egypt.”

However, though the central government has taken strides in including and moving towards equal ground for believers on a national level, it continues to have challenges in implementing justice fairly on a local basis because of independent police stations.

Due to this, Curry says it will take the Islamic community to speak in favor of Christians in order for Egypt to radically change on a national and local level alike.

“When you have radical or uninformed, even, Islamic people who are taking the messages of radical imams and blowing them up on [a] religious basis– they’re attacking, they’re kidnapping, these kinds of things– then only Islam can address that,” Curry says.

“This civil society that the police and the government need to do their part, but Islam needs to continue to address how they’re going to deal with Christians. It wasn’t always and is not always the case that Christians are hated by Islamic people. So, we need Muslim moderates and scholars to continue to raise their voice strongly on this and… often times, they don’t, I think, for fear.”

Pray for Christians in Egypt to be seen as equal members of society. Pray they will be treated fairly and that the Egyptian government would continue speaking for their rights. And, please pray for the safety of women who have been kidnapped and that the Lord would strengthen them.

India (MNN) – Religious persecution of Christians in India has been increasing. “We continue to hear stories of…