Natalya Mihailova | 19 November 2014
The assembly united about 400 people and included federal and regional lawmakers, members of the Public Chamber, medical experts and members of various church-related groups from 40 regions across Russia. The session took place in Moscow’s Christ the Savior Cathedral – the most important Orthodox place of worship in the Russian capital. 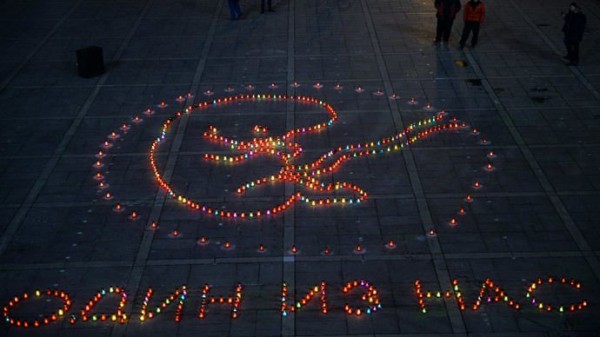 Protest against abortion "One of Us" in Yekaterinburg. (RIA Novosti / Pavel Lisitsyn)

“The human right for life from the moment of conception should be guaranteed by the Constitution and the process of changing the Constitution should be launched by a nationwide referendum,” newspaper Izvestia cited the resolution as saying. The politicians and activists are also seeing changes to federal laws on healthcare, on medical drugs, on medical insurance and on guarantees of children’s rights.

One of the main sponsors of the initiative, the head of the “For Life” movement Sergey Chesnokov, told the newspaper that although Russia ratified the International Convention on Children’s Rights in 1990, the authorities still do nothing to “protect children before birth.” Every year about 1 million women in Russia have induced abortions and only 10 percent of them are carried out for health reasons, Chesnokov said.

According to the resolution, any induced abortion is “murder” and must be banned. This also includes contraceptives “with an abortive function” – morning-after pills and intra-uterine devices – whose production, sale and use in Russia would also be banned. Members of the assembly quoted the state statistics agency, Rosstat, as stating that the number of Russian women who use abortive contraception is now about 9 million.

The document also suggests introducing criminal liability for doctors who perform abortions, for mothers who have them and also for anyone forcing or pressuring a woman to have an abortion. “Medical workers must always consider the [unborn] child as their second patient and make efforts, using all possibilities, to keep this child alive,” the resolution states.

The authors of the motion are also seeking to stop the practice of paying for abortion from universal state medical insurance, claiming that pregnancy is not a medical condition that requires intervention but a natural state. State Duma expert Olga Ponomaryova told the assembly that doctors receive about 6 billion rubles annually as fees for abortions, and if this was stopped, the money could be used for supporting motherhood.

The move is not the first attack by the Christian lobby against pro-Choice activists, but all previous proposals have been rejected by the government over fears that the ban would only lead to a growing number of back-street, illegal abortions, and lead to more risks to women’s lives and health.

The move gained little support from other politicians, however, and shortly afterward Mizulina played down her statements, saying that she merely wanted to draw attention to the problem and start a discussion, not introduce any legislative bans.

Most viewed articles
“Do Not Weep”145
Christ the Life Giver130
Best Films of the Pokrov Film Festival Have Been Determined129
The Religion of Self84
(VIDEO)Celebrating 5 years of Byzanfest International Orthodox Film Festival80
Patriarch Kirill Answers Questions from Participants of the Ninth Faith and Word Festival75
“He preached the message of the Resurrection for 12 years”: First Bishop of Deva Gurie Georgiu laid to rest at Cathedral of St Nicholas19
Patriarch Kirill: “An Effective Way to Overcome Social and Economical Dead End Is to Be Guided by the Word of God”13
Using Our Time Wisely to Cultivate the Seeds of Faith2
Most popular authors
Pravmir.com team297
Archpriest Peter Olsen145
Fr. Theodore Stylianopoulos130
Fr. Gabriel Bilas84
Aurelian Iftimiu19
Priest Luke A. Veronis2