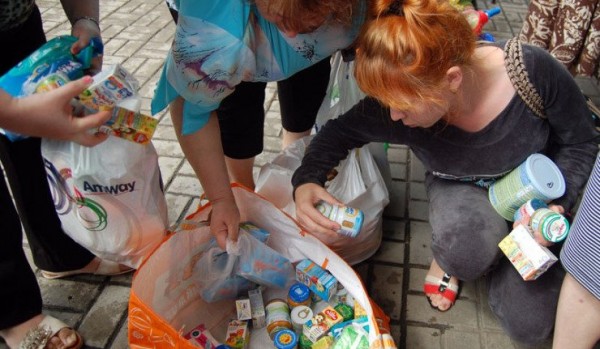 “Three tonnes of humanitarian aid are ready for departure because the facility is full up,” the IOPS deputy chairman, Yelena Agapova told ITAR-TASS on Thursday.

Clothes and foodstuffs will be soon given to children’ camp in Orlov Region, she said.

More than 13,500 refugees from southeast Ukraine, including more than 6,200 children, are staying in Russia, he said.

The inflow of refugees to Russia will grow, if martial law is introduced in Donetsk and Luhansk regions in the southeast of the country. These plans of the Kiev authorities will give a free hand to Ukrainian law enforcement agencies, Russian Foreign Minister Sergei Lavrov said.

Around 4,000 people have already asked for a refugee status, Russian Federal Migration Service said. As many as 3,630 refugees, most of them in southern Russia’s Rostov-on-Don Region are accommodated in southern regions. About 1,400 refugees have already been received in central Russia and 1,460 people in the Russian Republic of Crimea.

As many as 370 people, including 111 for yesterday alone, have been put on migration register in central Russia’s Vladimir Region since early June. First 79 refugees are coming to the Russian North Caucasian Republic of Kabardino-Balkaria on Wednesday. As many as 200 Ukrainian citizens had arrived in Voronezh Region in the south of the European part of Russia for the last two days. Twelve migrants were accommodated in Siberia’s Khabarovsk Territory. 640 Ukrainians turned for different kinds of aid in southern Russia’s Astrakhan Region and jobs had already been created for 100 people in the region. The government of Tula Region in the south of the European part of Russia stated they are prepared to receive 5,000 refugees. A second station for collecting humanitarian aid for refugees from southeast Ukraine was opened in the Volga River city of Yaroslavl. The emergency aid headquarters for refugees from Ukraine was formed in Samara Region in the Volga River basin.

President Vladimir Putin pledged on June 3 to give several instructions for aid to refugees from south-eastern Ukrainian regions.