Source: The Middle East Monitor
Natalya Mihailova | 26 April 2014
Representatives of orthodox national institutions in Jerusalem and the Palestinian territories have rejected the recruitment of Christians in the Israeli army yesterday. 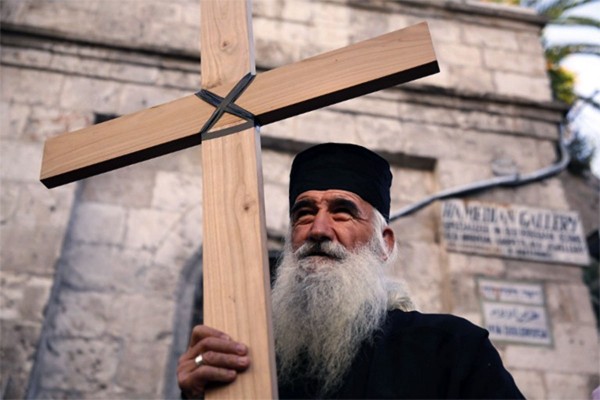 At a meeting in Jerusalem the foundations emphasised that the churches, Christian institutions and members of Christian denominations strongly reject recruiting their children in the Israeli army on the basis of ethical, humanitarian and national considerations.

The Orthodox institutions called on the Christian youth who receive forms requesting them to volunteer in the Israeli army to “shred them and throw them in the bin because dealing with these requests is not permitted in any way”.

They stressed the importance of young people collectively rejecting and confirming their allegiance to Palestinian Arabs. They have also approved a series of activities and events that call for the rejection of recruitment as well as a media campaign to explain the seriousness of this phenomenon.

The idea of Christian youth recruitment was raised in June last year when a hundred or so supporters of the military service met in the town of Jaffa; they were mostly Christian soldiers in the ranks of the Israeli army and police. The group was in the presence of the bishop Gabriel Nadav of the Greek Orthodox community and a number of security men.

In response to this, the Greek Orthodox community spokesman in Jerusalem Father Issa Musleh said: “We reject the recruitment of our Christian children in the Israeli army in Nazareth, Jaffa or anywhere else in the country and we have stated so in the past.”

Musleh added: “It is not permitted for any Priest or anyone of the priesthood to tarnish the reputation or, through giving a political opinion, offend the Arab Orthodox Christian community, which has led and continues to play a role in the Palestinian struggle and has numerous historical accounts in doing so.”

Most viewed articles
What Can the Church Offer the Youth of Today?131
Saint John Chrysostom and Family Life118
Patriarch Kirill: Awareness of One’s Sins Is the Greatest Value87
Metropolitan Hilarion: Christians in the Middle East and Other Countries Need Both Our Support and Prayer57
Our Unity in Christ43
Patriarch Theophilos III of Jerusalem: Our Common Commitment is to Gather for Prayer and Fellowship21
P.Kirill1
Most popular authors
Pravmir.com team165
Metropolitan Ephrem (Kyriakos)131
Archimandrite Ephraim of Vatopedi118
Abbot Tryphon43