Source: Assyrian International News Agency
Natalya Mihailova | 12 November 2015
As ISIS advances on Sadad, a strategic Syrian town near Homs, hundreds of Christian and Muslim fighters are battling to defend it. 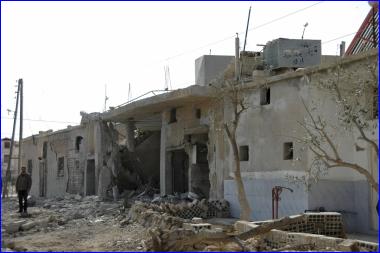 Sadad is considered strategic because it lies between Homs and Damascus, the capital of Syria, and two years ago was overrun by ISIS. It was recaptured by the Syrian army, but not before almost 50 Christians were massacred, and believers are once again fleeing the town in fear of the militants. The population of the town has dropped from 15,000 to just 2,000 in the past few months.

In an interview with Newsweek, Mor Ignatius Aphrem Karim II, the Patriarch of the Syriac Orthodox Church, confirmed that Sadad is under siege. But as the militants attack, at least 200 Syriac Christian fighters have been joined by Muslims from across Syria in an attempt to push them back.

“IS advanced toward Sadad but they were not able to enter,” Karim said. “The young people in Sadad, with the help of some armed groups, were able to fight back and push IS back to where they started. They are helped by some groups coming from different parts of Syria also.”

Karim said it is encouraging to see young Syriacs determined to defend their homeland, which is steeped in Christian history. It is likely the town translated as ‘Zedad’ in the Old Testament books of Numbers and Ezekiel, and its inhabitants still speak Aramaic, the language of Jesus. “To see them ready to fight and to sacrifice for their land, I think that’s what’s very meaningful, that made me very proud of them,” the Partriarch said.

“It is better that we stay in our homeland. If we die here, we are defending our homeland and we are not trying to flee.”

Speaking anonymously, a Syriac Christian fighter who is in Sadad told Newsweek that people from all over Syria have arrived to fight against ISIS. “It is a symbolic place for us and we will not allow it to fall again,” he said.

Last week, Archbishop Selwanos Boutros Alnemeh of the Syriac Orthodox Metropolitan of Homs and Hama warned that if Sadad is captured by militants, it would mean the loss of the “centre of Christianity in our diocese.”