Christians and the Egyptian Revolution: a positive contribution and future inquiries

Egyptian Christians had to consider some fundamental questions. To some degree they were forced to choose between the need for bread and dignity on the one hand, and religious fulfillment in obeying the patriarch on the other hand. It was a precious opportunity to push people to question everything around them and, eventually, stand for their liberty.
Minas Monir | 06 March 2011

“In that day there will be an altar to the LORD in the heart of Egypt, and a monument to the LORD at its border.” Isaiah 19:19.

It seems this prophecy that Isaiah wrote around 500 years BC while Jews were captured in Babylon, had a resonance in Egypt on february 6th when Christians celebrated services in the heart of Tahrir square. In a fabulous scene not often witnessed in Egypt, Muslims formed a barrier around them to protect Christians as they prayed. This mirrored the gesture of Christians protecting Muslims at prayer in the same square during the 18 days of demonstrations. This clearly showed that freedom of speech, honorable life, and bread are justifiable demands for every Egyptian who lived under such a regime for more than 3 decades regardless of their religious or ideological background. 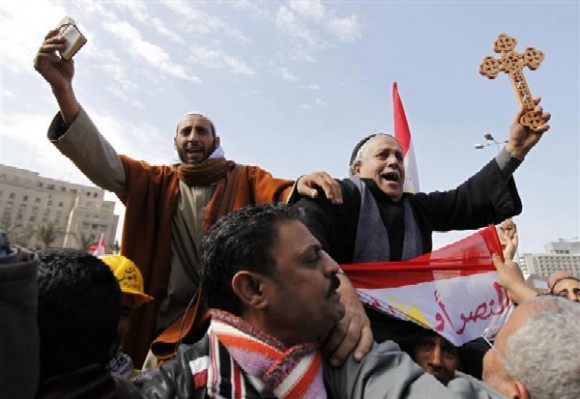 Yet there was some tension between these demands and the people’s religious leaders. On the ground, the former Egyptian regime employed media and religious institutions to abort this revolution a few weeks before it took place. The Patriarch of the Copts, Shenouda III, and Ahmed al-Tayeb, the Grand Imam of Azhar, appeared on TV frequently to show their solidarity with the former regime and its head, Mubarak. Instructions for Copts in services not to go out and stay home were made by the Holy Synod spokesmen three days before the revolution broke, on January 25th.

Consequently, Egyptian Christians had to consider some fundamental questions. To some degree they were forced to choose between the need for bread and dignity on the one hand, and religious fulfillment in obeying the patriarch on the other hand. It was a precious opportunity to push people to question everything around them and, eventually, stand for their liberty. Thousands of Christian youth appeared one day before the revolution on Facebook declaring that they are part of the Egyptian fabric and acting positively doesn’t violate their faith at all, as some of the videos recorded on the internet stated. Because of this decision, there in Tahrir square Egyptians left behind them sectarianism and divisions. A culture of coexistence and harmony was growing in the middle of the crisis. However, before getting more optimistic regarding the current situation after overthrowing Mubarak’s regime, there are geostrategic and ideological challenges that will face Egyptians, and particularly Christians. Egypt lies in the heart of the Middle East where radical Islamists are waging their perpetual battle with Israel and the West. Strategically speaking, a great challenge will face Egyptians in blocking the waves of jihadists who started to use the Rafah border crossing between Gaza and Egypt and illegal tunnels dug by Hamas.
There is also the heritage of Salafists who have invaded Egyptian media since the 1980’s when the Wahhabi ideology came back to Egypt via Egyptians who had worked in Saudi Arabia. News sources reported that five radical Wahhabi channels that were previously blocked by Nilesat Egyptian satellite, are now back on air and their broadcasts started by praising the “Islamic State” Egypt. There is also the extent of the influence of Egypt’s most established Islamist group, the Muslim Brotherhood, to consider. Despite the deeply rooted Islamist movements in the Egyptian social culture, particularly after 1970, Egyptians have the potential to build a civil state that can protect the full citizenship rights of the different elements of its fabric, including Christians. This can be achieved through a vital role played by pro-civil state streams, and Christians should be one of them.

What prevents Christians from their full practice of political rights is the heavy heritage of negativity towards political life in Egypt. This comes directly from the consecutive regimes that governed Egypt and ignored strong and efficient Christian figures to contribute to political life since the early 1950’s. The Wafd party which always preserved the equal contribution of Christians and Jews along with Muslims in the governments of pre-1952 revolution Egypt was dissolved and brought back in the 70’s with a completely new identity that cannot function in holding different Egyptians of various religious backgrounds together.
Observers note the sociological and cultural shift in Egypt after former president Sadat, who succeeded Gamal Abdul Nasser in 1970, began to employ religion intensively to erase the challenging legacy of Nasserism and present an alternative type of heroism for the new president. As Nasser was the hero of 1952 revolution and founder of socialist Egypt, Sadat became the hero of 1973 Yom Kippur war who launched what was called the “state of science and faith” whereby he called himself the “faithful president.”

Sadat released Islamists who were arrested in the time of his predecessor and gave freedom to the Muslim Brotherhood to revive their activities. He also made constitutional amendments that designated Islamic Law as the main “source of legislation” in Egypt. This played the biggest role in deviating Copts from political life. Sadat used the Church with its high impact on Christian millions in Egypt and relationships with the West for political interests. Sources close to Sadat suggest that he chose his preferred candidate for the next patriarch to be installed as head of the Coptic Church. This was Shenouda III.
Shenouda’s post after the assassination of Sadat was to represent Copts before president. This limited Copts to the Patriarch’s own political view instead of encouraging them to personally engage with politics and seek their rights. In 2005 the first direct-poll presidential election witnessed the climax of the intertwined relationship between the Church and state. Patriarch Shenouda III and the Holy Synod published an advertisement in the official Patriarchal bulletin declaring that the Church supports Mubarak for president.

A few years later, there were controversies regarding the possible inheritance of the presidential office by Gamal, Mubarak’s son. Strikingly, Bishop Bishoy and Patriarch Shenouda III on TV and in newspapers backed Gamal to run for president in the next presidential election. In the current revolution, Shenouda III spoke to Egyptian TV live in February 7th to declare his full solidarity with Mubarak and explained his rejection of the youth revolution.

This demonstrated the disconnect between the patriarch and the Copts who found their aspiration better represented by this popular revolution. The absence of Copts from the social and political life and their retreat into the church led to the failure to change the situation. However, the amazing awareness of the justifiable demands for change led them to break through the classic fences built by church and state in the last 40 years. And today we witnessed political secular thinkers and young men who managed to achieve a balance in the religious profile of the revolution.

The challenge today for Christians in Egypt is to make use of the open atmosphere to act positively in order to achieve a series of legislative and constitutional reformations in order to guard the right of citizenship of every Egyptian regardless of his/her ideological or religious background. Citizenship should be the main challenge for the next stage in the political life of Egypt. But it won’t see any progress without a faithful contribution in forming a better and modern civil state that can express its diversity within the articles of a new constitution guarded by a sincere love for Egypt and all Egyptians.