The Egyptian revolution of 25th of January 2011 completes its first year with a host of events and decisions that are rewriting the history of this 7000 year old country.
Minas Monir | 25 January 2012

Back to square one?

The Egyptian revolution of 25th of January 2011 completes its first year with a host of events and decisions that are rewriting the history of this 7000 year old country. Realistically, Egyptians are meeting this first anniversary with an unequivocal sense of frustration that will turn the 25th of January 2012 into a “second wave” of the revolution rather than a celebratory day. Observers of the scene in Egypt understand very well the reasons behind this popular frustration. 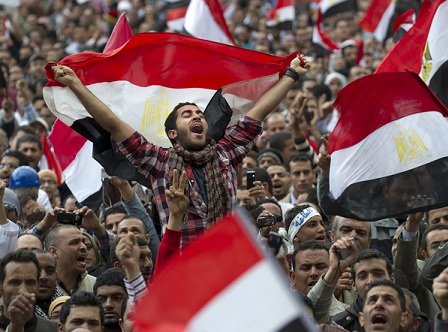 While the goals of the revolution were posted on a huge poster in Tahrir revolution during the 18 days of demonstrations, many of these goals have yet to be fulfilled. Apart from overthrowing the former president Husni Mubarak, Egyptians still crave the “dignity, freedom, social justice” that they went to streets for in 2011. After the resignation of Mubarak on February 11th 2011, the Supreme Council of Armed Forces (SCAF) took over power in Egypt and claimed, in their first couple of statements, that they will hand over power to a democratically elected president after six months. However, this did has not happened so far.

The oppression, censorship and absence of freedom that marked Mubarak’s reign have continued in a rather vicious way after the revolution. Throughout her whole history, Egypt did not experience such a mass arrest of civilians who have been thrown into the prisons of the military police. The performance of the state media and its unconditional loyalty to the government has not changed. Egyptian state media has been prone to disparage the revolution and the political powers that called for it.

Yet, the main problem is the hideous expansion of the fundamentalist powers in Egypt. As early as March 2011, Islamists decided to pursue an alliance with the SCAF based on reciprocal interests. This has been seen in the strong speech of Islamists in support of the SCAF, which has seen them publicly deplore any attempts to protest against military rule. The SCAF seem to have reciprocated. The Salafists (the most radical wing of the Islamist political groups) have not experienced any effective response from the government to their attacks on Egyptian Christians.

Since March at least five churches have been destroyed, tens of Christians killed and hundreds injured. There have been no trials of Islamists who incited these attacks. Meanwhile, Christian protesters met the most gruesome attack ever seen in Egyptian streets when military vehicles drove into the crowd of Coptic Christian demonstrators on 9th October 2011. More than 20 Copts were crushed under army vehicles or shot by the military police that night. Subsequently, there were arrests of more than two thousand people who were held without charge under the emergency law.

On the legislative level, the ambiguous, and sometimes incongruous, approach undertaken by the government during this transitional period meant that Egypt was unprepared to hold a constitutional referendum and parliament election processes. Most notably, the inability to implement a law that prohibits using religious slogans in elections led Islamists to polarize Egyptians to two opposing camps: those for and those against Islamic law. The religious and politically unaware Egyptians decided to stand for religion and this automatically brought a striking victory for the Muslim Brotherhood and Salafist parties in the parliamentary elections.

This contentious approach, which grinds against the goals of the revolution, has ensured that a renewed demonstration on January 25th this year is an ineluctable event.

Although the attitude of the new regime is bringing Egyptian society back to the time of Mubarak, the political scene has changed considerably. In preparation for the coming protests, we now know that Islamists are satisfied enough with their electoral success that do not need to join the coming uprisings. This means that the momentum of the protests will not face the governmental executive body, but also the new legislative body of those who won the majority of the parliament seats.

Other institutions will no longer be able control their followers as before. This includes two religious bodies: the Coptic Church and Egypt’s official Islamic body, al-Azhar . One of the fruitful outcomes of this revolution was to restore the Copts’ place in the Egyptian street without being marked as Christian. The Coptic patriarchate, which is the state church that has been loyal to the regime for the last 60 years, has been taming the increasing Coptic wrath against sectarian violence. This does not work anymore and Copts today joined their Muslim fellows in the street protests. The speech of Patriarch Shenouda III against the Coptic community’s rejection of his decision to receive SCAF members in the congregation for the Christmas liturgy did not work this time, at least on the rising new generation who believe in separating politics from religion.

The coming “second wave” of the revolution will be a vicious military machine with alleged legitimacy provided by the predominantly Islamists parliament. This simply means that the revolution’s shape must also evolve to meet these new challenges. Several observers today call Egyptians to bring the winds of revolution to the Egyptian street as well as its legislative body, the most influential body in the Egyptian regime.

Finally, I would like to add, as a liberal Christian Egyptian, that the emergence of Islamists in the parliament is good for several reasons. First, it will show patently how these groups cannot run the country with their idealist religious principles that cannot deal sufficiently with the economic and political challenges today. Recently, Islamist parties have already compromised their very fundamental principles by meeting American delegations and assuring them that they won’t cancel the Camp David peace agreement with Israel. Secondly, the ambiguity of the Islamists’ place on the Egyptian political map helped them to swing between the two camps, for and against the revolution, whenever they need. This gave them the political momentum which brought them to the parliament. Now they are outside the Tahrir square camp and this will limit their legitimacy from the Egyptian street’s perspective.

Therefore, to sum up, the coming year will not be less momentous than the previous one and all the possibilities are present on the table. The coming process of change will require cooperation between the different groups to avoid neglecting the rights or hopes of any particular group, especially in the coming process of drafting the new constitution and procedures for the presidential election.