NEW YORK — In spite of an uncertain future, the Christians in Syria want to stay put. This was the message delivered by the Melkite Greek-Catholic Archbishop of Homs, Hama and Yabrud, Msgr. Jean Abdo Arbach. He told international Catholic charity Aid to the Church in Need: “We Christians are living in fear, the future is uncertain, but we want to stay in our homeland.” 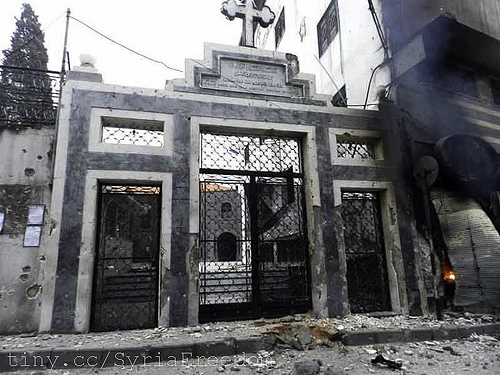 Despite reports to the contrary, the 61-year-old native Syrian said, 20,000 Christians of various denominations currently live in Homs close to the border with Lebanon, and about 200,000 in the Homs region. Many of the faithful, including Melkite, Greek-Catholic, Syrian-Catholic, Maronite, Greek-Orthodox and Orthodox, have now returned to the city of Homs, according to the prelate.

“The situation in and around Homs is calm. Government troops have almost complete control over the region and the rebels control only four to five districts. The main fighting is taking place in the cities of Yabrud and Hama,” said the archbishop, who is committed to staying in Homs. “For the faithful it is important that their priests and their bishop bear the suffering and persevere like everyone else,” he added.

He reported that news coming from the north of Syria, which is controlled by the rebels, is alarming. He said: “Islamic law is to be applied, while all Christian symbols which are publicly visible are to be destroyed. Also, Christians who wish to remain will in future have to pay a special tax.”