LAHORE, Pakistan  — Hundreds of Christians clashed with police across Pakistan today, a day after a Muslim mob burned dozens of homes owned by members of the minority religious group in retaliation for alleged insults against Islam’s Prophet Muhammad.

Christians are often the target of Pakistan’s harsh blasphemy laws, which rights activists say are frequently used to persecute religious minorities or settle personal disputes. Politicians have been reluctant to reform the laws for fear of being attacked by religious radicals, as has happened in the past.

The plight of Pakistan’s other religious minorities, such as Shiite Muslims, Hindus and Ahmadis, has also deepened in recent years as hard-line interpretations of Islam have gained ground and militants have stepped up attacks against groups they oppose. Most Pakistanis are Sunni Muslims.

The latest incident began Friday after a Muslim in the eastern city of Lahore accused a Christian man of blasphemy — an offense punishable by life in prison or even death. A day later, hundreds of angry Muslims rampaged through the Christian neighborhood, burning about 170 houses.

Authorities have arrested 160 suspected members of the mob, many of whom were identified through TV footage and photos published in newspapers, said police officer Abdur Rehman.

But it remains to be seen whether anyone will be held to account. Mob violence is not uncommon following blasphemy allegations, and police often round up large numbers of suspects. However, these arrests rarely result in actual convictions.

There have been no convictions related to a deadly attack on Christians in 2009 in the eastern city of Gojra that was also sparked by blasphemy allegations, the Express Tribune newspaper reported today. Angry Muslims burned dozens of houses in Gojra, killing eight Christians — seven of them from one family trapped in a burning home.

No Christians were hurt in Saturday’s attack in Lahore because they fled the area overnight before the mob arrived. But police were criticized for failing to prevent the mob from attacking the Christians’ homes.

The largest demonstrations today were in Lahore and the southern city of Karachi. About 1,000 people protested in both places, and smaller demonstrations were held in the capital, Islamabad, and the adjoining city of Rawalpindi.

In Lahore, hundreds of protesters, some carrying large crucifixes, blocked a main highway as they pressed their demands for better compensation payments from the government, said police official Malik Awais. Police fired tear gas canisters and used batons to disperse the demonstrators and took six of them into custody, he said.

The protesters damaged several vehicles, uprooted a fence along the road and burned an electricity generator, Awais said. They also pelted police with stones, injuring seven of them, he said.

Government spokesman Pervaiz Rasheed promised the government would help the Christians rebuild their houses, but the protesters expressed dissatisfaction with the way the government was handling the incident.

“I have been robbed of all of my life’s savings,” said Yousuf Masih, standing outside his burned home. He said the government’s announcement that it would give 200,000 rupees ($2,000) compensation to each family was a joke.

In Karachi, protesters blocked a road in a main market and damaged about 25 vehicles, said police officer Ali Raza. Some of the demonstrators also attacked 10 shops and looted valuables and cash, he said. Police beat back the protesters and fired tear gas to disperse them. At least two protesters were taken into custody, Raza said.

Police have taken the Christian man accused of blasphemy into custody pending an investigation. Those who attacked the Christian neighborhood are also being investigated for a range of offenses, including arson, robbery and insulting the feelings of the Christian community, said Rehman, the police officer.

Akram Gill, a local bishop in the Lahore Christian community, said the incident had more to do with personal enmity between the two men involved than blasphemy. He said the men got into a brawl after drinking late one night, and in the morning the Muslim man made up the blasphemy story as payback.

Once an accusation is made, it’s difficult to get it reversed, partly because law enforcement officials and politicians do not want to be seen as being soft on blasphemers.

Two prominent politicians were assassinated in 2011 for urging reform of the law. The killer of one of the politicians was hailed as a hero, and lawyers at his legal appearances showered him with rose petals.

According to Human Rights Watch, there are at least 16 people on death row in Pakistan for blasphemy and another 20 are serving life sentences.

While Muslims are frequently accused of blasphemy, members of Pakistan’s small Christian community are especially vulnerable to the accusations. Christians make up less than 5 percent of Pakistan’s 180 million people and many hold low-paying jobs, such as cleaning and street sweeping.

Last year, there was a rare reversal of a blasphemy case against A teenage Christian girl with suspected mental disabilities who was accused of burning pages of the Quran. She was released after a huge domestic and international outcry about her treatment. A local Muslim cleric was arrested and accused of planting the pages in her bag to incriminate her, a rare example of the accuser facing legal consequences. However, he was later freed on bail. 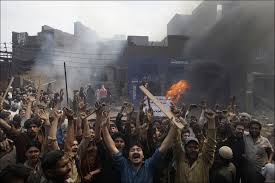 April 5, 2013 A Muslim mob burned shops and cars and threw stones at a church…