Source: Interfax-religion
Natalya Mihailova | 08 February 2017
Saidnaya, February 7, Interfax - Nuns of the ancient Syrian Orthodox Monastery of the Saidnaya Mother of God thank Russia for help in settling the Syrian crisis and invite Patriarch Kirill of Moscow and All Russia to visit it. 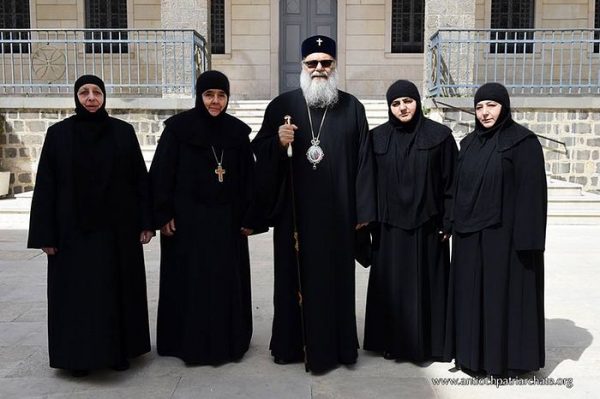 “Patriarch Kirill visited these places as a pilgrim, and now he is considering his possibilities to do it again,” his representative at the Antioch Patriarchate Hegumen Arseny (Sokolov) told the journalists on Tuesday.

Thus he responded to the invitation of the rector Hegumenia Fevronia, who received the delegation of the parliamentary group for friendship of Syria and Russia that is on visit to the Syrian Arabic Republic these days.

The hegumenia also told that nuns of the monastery constantly prayed for Russia’s prosperity, for the health of Russian president Vladimir Putin and thanked for help in settling the Syrian crisis.

Hegumen Arseny greeted the Mother Superior on Patriarch Kirill’s behalf and handed over memorable gifts to her.

The Saidnaya Monastery is one of the oldest in the world. It has always attracted many pilgrims. The monastery was a target for bombings, but as the hegumenia said at the meeting, “thanks to God, there were no victims.”

Several miraculous events were registered when the rocket hit the building of the monastic school, but never exploded.

“The monastery is protected by the Mother of God. We have evidence of some soldiers who said they saw the Holy Virgin Mary, saw her protecting our city and the monastery,” the hegumenia said.

French Saxophonist Ordained a Priest for…

Claude Delangle, the most sought-after master of the saxophone in the world,…

Never Say “I Will Do It…

Most viewed articles
Archbishop of Australia Does Not Want to Separate People into “Vaccinated and Unvaccinated”152
Peace In Chaos107
Finding God through the Psalms79
French Saxophonist Ordained a Priest for Orthodox Parish in Louveciennes65
The Birth of Our Most Holy Lady: Reason for Spiritual Joy and Exaltation49
In Hurricane Ida’s Wake, Metropolitan Joseph Brings Comfort, Resources to Louisiana Church45
Romanians Offered Bulgarians a Second Vestment of St. Paraskeva and 30 Tons of Food40
Never Say “I Will Do It Tomorrow”: Elder Dionisie of Colciu’s 112th Birth Anniversary35
In Connection with the Tragedy in Perm, Patriarch Kirill Urges to Pay More Attention to the State of Mind of Young People24
How Involved Should the Church Be in Politics?1
Most popular authors
Pravmir.com team241
Archpriest Michael Gillis107
Fr. Theodore Stylianopoulos79
Archimandrite Ephraim of Vatopedi49
Peter Samore45
Ștefana Totorcea40
Aurelian Iftimiu35
Archpriest Lawrence Farley1