Source: Christian Daily
Lorraine Caballero | 19 August 2016
Christians in Egypt are waiting for a vote on a law that would ease the restrictions on construction of new churches, and that vote could happen as early as next month. 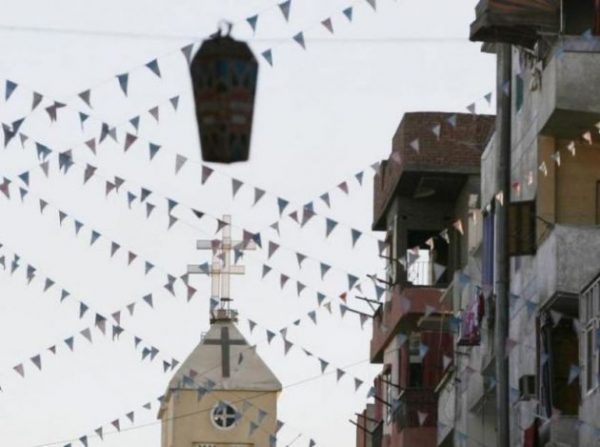 Photo: Reuters/Asmaa Waguih. A cross of an Egyptian Coptic Orthodox church is seen under a ''Fanous'' or decorated lantern in the town of Nagaa Hamady, in Qena, 700km (435 miles) south of Cairo, January 9, 2010.

Egypt’s current law makes it very difficult for Christians to build their own places of worship since such buildings require approval from local Muslims. In addition, the proposed church should be located at least 340 feet away from the nearest mosque, and they could not be built near government establishments, schools, village canals, railways, and even between residential areas, Christianity Today details.

Because of the restrictions, only a few churches have been built in Egypt. Coptic Solidarity says an average of two churches every year has been approved for construction in the last 60 years, and there are less than 2,600 churches all in all. While there is one mosque for every 620 Egyptian Muslims, there is about one church for every 5,500 Christians in the country.

The scarcity of churches in Egypt has led many Christians to conduct their services in house basements, the World Watch Monitor says. However, these gatherings are illegal, thus they are easy targets for Islamist extremists.

Egypt’s 2014 constitution includes a requirement that the Parliament pass a law that would ease the restriction on church constructions. The deadline for this falls within the first term, but the Parliament moved that to the end of September since it was unable to complete the task.

There have been rumors about a draft that would require Christians to seek the approval of a governor instead of the president in order to build a church. Since there is still no official confirmation of the deadline for the vote for the legislation, Egyptian Christians continue to wait.

Meanwhile, Egyptian Christians also have to contend with other faith-related problems aside from the church construction issue. When interfaith disputes and violence erupt, extra-judicial councils more often than not side with Muslims, The Associated Press reports.

The string of attacks on Christians by Muslims mobs has also prompted the believers to break the country’s protest ban and stage a demonstration last weekend. The Egyptian Christians said they are tired of being treated as second-class citizens in their own nation.