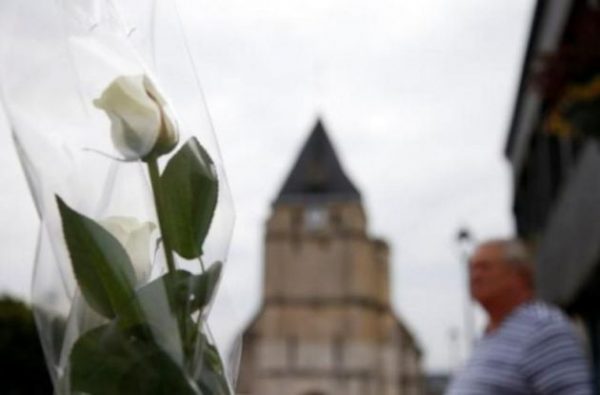 (REUTERS / Pascal Rossignol) A white rose is attached to a post in front of the church a day after a hostage-taking in Saint-Etienne-du-Rouvray near Rouen in Normandy, France.

The number of anti-Christian attacks in France has risen to 245 percent since 2008, even though incidents of anti-Muslim and anti-Semitic attacks dropped significantly in the same period, according to the country’s interior ministry.

In 2015, the French government allotted 100 million euros for its campaign against racism, Islamophobia and anti-Semitism after tallying a record number of such incidents. However, the year 2016 saw a 17.4 percent increase in the number of attacks targeting Christian churches, Breitbart relays.

According to Le Figaro, 90 percent of attacks on places of worship target Christians. The paper also notes that this is expected since Christian churches are the most numerous among all the places of worship in the country. In fact, there has been a steep increase in such incidents from 2008 to 2016.

Out of the 949 attacks on places of worship, most have no religious motive, according to the French government. However, there is a possibility that 25 of the incidents were driven by “anarchist” motives and 14 by “satanic” motives.

Local media said Christian religious statues were the subject of daily attacks in Dulmen after more than a million migrants entered Germany.

Last month, the Observatoire de la Christianophobie said the number of “Christianophobic” attacks in France climbed to 376 last year from 273 in 2015. December 2016 has seen a significant number of attacks on churches and threats on social media, the pressure group added.

The worst anti-Christian attack that happened in 2016 was the killing of Fr. Jacques Hamel during a Mass at a Saint-Etienne-du-Rouvray church. The elderly priest died after two Islamists slashed his throat.

During a memorial service for Fr. Hamel, Archbishop Dominique Lebrun relayed how the priest shouted “Be gone, Satan!” while the Islamist attackers slit his throat. Lebrun also urged those who are drawn to extremism to pray that God will set them free from the devil’s grasp.