Church not for any candidate in Egypt’s presidential polls: Coptic pope 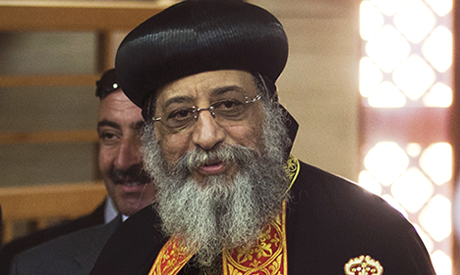 Egypt’s Coptic Orthodox Pope Tawadros II said on Sunday that the church would not support either candidate in the country’s upcoming presidential race.

“I ask each citizen, Christian or Muslim, to read each candidate’s electoral program and choose who he wants to be president,” Tawadros said during an interview with Hamel El-Resala, a newspaper issued by the Catholic Church in Egypt.

Last March, an interview with the pope was published in a Kuwaiti newspaper in which he urged El-Sisi to run for Egypt’s presidency. A few days later, Tawdros vehemently denied having given any interviews in “the past two weeks.”

In Sunday’s interview, he further defended his decision to support a “yes” vote in January’s constitutional referendum, explaining that his stance was only normal given that the church was a member of the constituent assembly that drafted the national charter.

“The church’s participation on 3 July was a national participation, not a political one, a participation for the good of Egypt,” said Tawadros, who was present along with Al-Azhar’s Grand Imam Ahmed El-Tayyeb and other political forces during the announcement of the transitional roadmap – announced on 3 July by then-defence minister El-Sisi – that included the ouster of Islamist president Mohamed Morsi, amending the constitution and holding parliamentary and presidential polls by mid-2014.

“I can’t stay in my place when the Egyptian people are all revolting in the streets,” he added.

Regarding Coptic Christians visiting Jerusalem for religious pilgrimage, Tawadros again stressed the Coptic Church’s stance of being against any form of normalisation with Israel, but said that elderly pilgrims were exempt from the church’s ban as they “want to visit sacred places before dying”.

The Orthodox Church’s position on the issue dates back to Pope Cyril VI, who prohibited trips to Jerusalem in 1969, a year after it was occupied by Israeli forces.

The decision was reactivated during the reign of late Pope Shenouda III after Egypt signed a peace treaty with Israel in 1979.