Church Comes Under Bombardment in the Diocese of Horlivka and Sloviansk

Source: Pravmir.ru
Natalya Mihailova | 25 November 2014
November 22, 2014. The city of Debaltseve came under bombardment once again at 22:30-23:00 on November 21. Two missiles, launched by the “Hail” volley fire system, hit the premises of the St. Alexander Nevsky Church. At that time there were no people near the church. 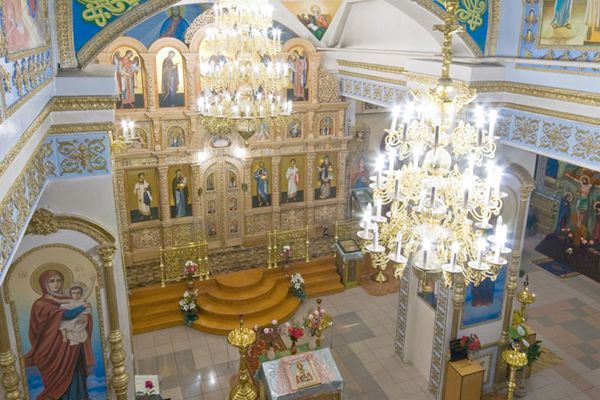 The press office of the Diocese of Horlivka and Sloviansk has reported that the church was partly damaged – the dome was harmed and windows were broken.

Windows and doors were smashed in the chapel situated on the premises of the church. According to Archpriest Bogdan Ilchuk, Rural Dean of the Debaltseve district, there are victims among civilians following the bombardment. The number of the deceased is yet unknown.

The St. Alexander Nevsky Church was constructed at the place of a church, destructed during the Soviet period, in Debaltseve. It was consecrated in 2001. The standard cross-domed church was built to the design of the old-Russian architecture. Moscow experts created the carved iconostasis for the church. The icons were painted in the Ruyblev style. Archpriest Miron Kvasnikevich, Rector of the church, helped in the painting of the church.

Various churches have been damaged during the armed opposition in Donbass. Two parishes of the Horlivka Diocese in honor of the Annunciation of the Holy Theotokos in Horlivka and St. John of Kronstadt in Kirovo have been deprived of their churches. A missile hit the church in Kirovo during a divine service. Consequently, three parishioners died. A missile fragment killed a watchman of the Resurrection Church in Sloviansk.

Most viewed articles
Growing Cold in Faith after a Few Years in Church: Is This Normal?187
How to Survive in Modern City. 8 Essential Conditions124
Russian Church to Help Provide Lebanon with Vaccines Against Coronavirus88
Bishop Irenei Addresses a Symposium on “The Mother of God in Our Lives” in Los Angeles88
It’s All About the Resurrection – Reflecting on the Season85
Over 20 Thousand People Pray for Discrimination of the Ukrainian Orthodox Church60
Vandals Attack Serbian Church in Croatia53
Appeal for Help from the Church of the Mother of God in Austria51
Volunteers from St George Greek Orthodox Church in Rose Bay gather to cook for the homeless47
We’re Being Robbed1
Most popular authors
Pravmir.com team289
Archpriest Nikolai Markovsky187
Fr. Andrei Gavrilenko124
Archpriest Gabriel Rochelle85
Archpriest Georgy Kharlov51
John Voutos47
Archpriest Stephen Freeman1