Source: DECR
Natalya Mihailova | 26 August 2014
On August 24, 2014, in compliance with the decision of the Russian Orthodox Church Holy Synod, a delegation of the Russian Church arrived in Tehran for the 9th session of the Joint Russian-Iranian Commission for Dialogue “Orthodoxy-Islam”. 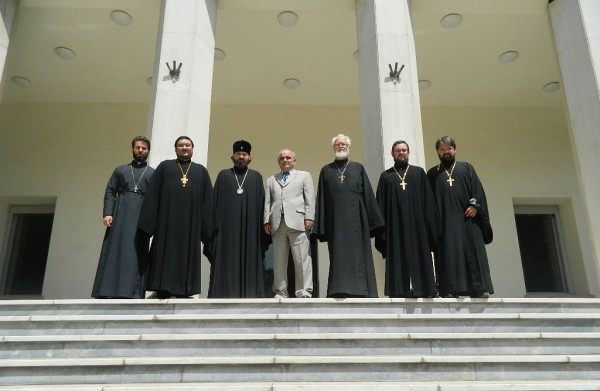 The guests were met at the airport by Archimandrite Alexander (Zarkeshev), rector of St. Nicholas’s in Tehran, representatives of the Russian embassy, as well as staff members of the Islamic Culture and Relations Organization (ICRO), led by the director of the Center for Interreligious Dialogue, Mr. Ali Mohammad Helmi.

The delegation visited the Russian embassy to meet with Ambassador L. Dzhagaryan. Archbishop Feofilakt introduced him to the program of the forthcoming dialogue and the Russian Orthodox Church’s stand on a number of pressing issues concerning dialogue with Islamic countries. The Mr. Dzhagaryan explained the work of the Russian diplomatic mission in Iran and shared his vision of important problems involved in the Russian-Iranian relations. The guests visited the historic hall in the embassy in which the Tehran Conference members, Stalin, Roosevelt and Churchill met in 1943.

On the same day, the members of the delegation in holy orders celebrated the Divine Liturgy at St. Nicholas’s. The service was timed to the 70th anniversary of the foundation of the church. Along with permanent parishioners from among the descendants of Russian émigrés, the service was attended by staff members of the Russian embassy and their children.

The total number of Russian Orthodox churches as of 1917 in Persia was over 50. After the 1917 Revolution, Soviet Russia came to own all the land plots of the Russian Imperial mission with all its buildings and property in them, as well as all the embassy’s and consulate’s Orthodox churches, which were closed.

The Russian community in Persia considerably increased in the 1920s as it came to include Russian émigrés from Russia. In the 30s, a Chapel of St. Nicholas was arranged in Aromane Street but it could not accommodate all the parishioners, especially on great holidays.

In February 1941, the Russian community bought a piece of land across the US Mission in the northern suburb in Tehran. In August 1944, the ceremony of laying the church foundation stone was performed by Archimandrite Vitaly (Sergeyev) as rector of the chapel appointed by the ROCOR.

In 1994, the community of the church moved to the jurisdiction of the Moscow Patriarchate and in 1995, Hieromonk Alexander (Zarkeshev), now archimadrite, was appointed rector of the church.