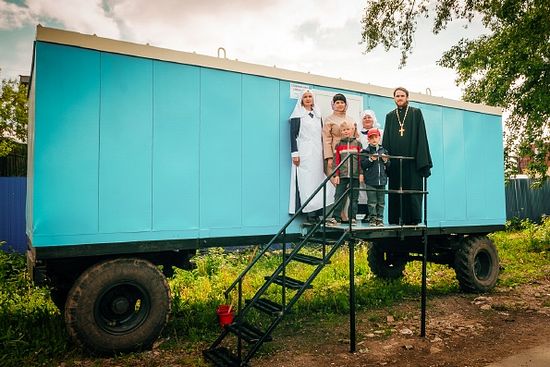 A new project addressing the needs of the poor and homeless in the territory of the Almetyevsk Diocese of the Russian Orthodox Church was launched recently in the town of Bugulma in the Russian Tatarstan Republic.

On June 14, the head of the diocese’s Social Department Fr. Konstantin Petryaev celebrated the rite of the consecration for the new mobile social refectory. The ceremony was attended by the Deputy Mayor Irina Belova of Bugulma and representatives of the sisterhood of the Almatyevsk Diocese, reports the site of the Tatarstan Metropolitanate. The new trapeza is made from a trailer previously used by geologists and oil workers that was given to the Church by a local oil exploration company. The room is equipped with its own heating system, which will allow it to be used in the cold season. The social trapeza will be used by the Sisters of Mercy of the Almetyevsk Diocese to feed the local homeless and poor for free. Food was previously distributed in the area in tents and temporary pavilions, but the new mobile dining hall provides more comfortable conditions. The food will be prepared in the refectory of the Church of the Nativity of St. John the Baptist in compliance with all sanitary norms and rules. According to the agreement with the city administration, the address of the trailer will be near the railroad station, which is a traditional venue for the charity events of the Almetyevsk Diocese’s Social Department.

Something similar was opened in the far eastern city of Khabarovsk last year, where three specially-equipped railway cars were converted into a shelter for the homeless.

Most viewed articles
A Great Time to Join the Orthodox Church216
New Jersey Governor Signs Bill Legalizing Abortion Up To Moment of Birth105
The Way of Christ Is The Way of Love75
Brooklyn Street Co-Named for Antiochian Pastor Who Served a Half Century There59
Metropolitan Hilarion: the Church and traditional confessions have done everything possible to improve the situation in Kazakhstan51
Metropolitan Hilarion Celebrates the 20th Anniversary of His Episcopal Consecration45
My World’s Different39
First Church in the Antiochian Archdiocese Named for St. Xenia of St. Petersburg Prepares for Feast Day31
Patriarch Porfirije of the Serbia: Our Position on the Church Issue in Ukraine Has Not Changed9
1
Most popular authors
Frederica Matthewes-Green216
Pravmir.com team136
Ryan Foley105
Fr. Theodore Stylianopoulos75
Peter Samore59
Protopresbyter Themistoklis Mourtzanos39