Church Leaders Call for Justice and Peace in Syria

Source: Standard Newswire
Natalya Mihailova | 14 June 2014
GENEVA, June 13, 2014 /Standard Newswire/ -- Recognizing the failure of the Geneva 2 talks four months ago and the ongoing violence and human calamity in Syria, church leaders and representatives from Syria gathered in Etchmiadzin, Armenia, to address the challenges for faith communities in the crisis in Syria. 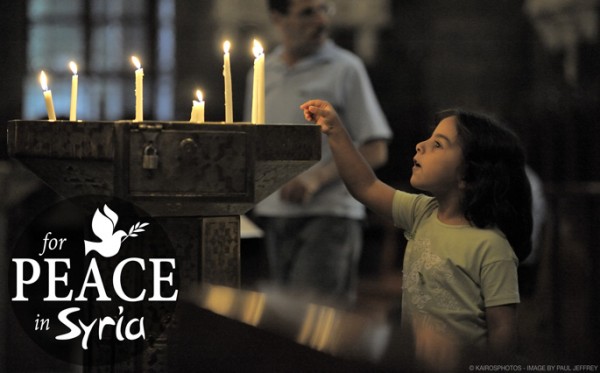 The group met June 11 and 12 in a consultation at the invitation of His Holiness Karekin II, Supreme Patriarch and Catholicos of all Armenians, in cooperation with the World Council of Churches (WCC).

In a communique released by the group on Thursday, 12 June, they called for restrictions on funding humanitarian aid in Syria to be lifted, for an end to the flow of arms and funding to all parties to the conflict, and for withdrawal of all armed foreign fighters.

Conferees pointed to the current regional humanitarian assistance addressing the needs of refugees fleeing Syria, and they called for “further cooperation among the different churches and church agencies” working there.

They acknowledged the 22 January, 2014 meeting on Syria held at the Ecumenical Centre in Geneva where church leaders said in a message to Lakhdar Brahimi, the United Nations-Arab League joint representative for Syria, that they were convinced there is no military solution and there needed to be an “immediate cessation of all armed confrontation and hostility within Syria” ensuring  that “all vulnerable communities in Syria and refugees in neighboring countries receive appropriate humanitarian assistance” and that “a comprehensive and inclusive process toward establishing a just peace and rebuilding Syria” should be developed.

In Armenia they also called for “the immediate release of the two Archbishops from Aleppo, His Eminence Boulos (Yazigi), Greek Orthodox Metropolitan of Aleppo and Alexandretta, and His Eminence Mor Youhanna Gregorios (Ibrahim), Syriac Orthodox Metropolitan of Aleppo, as well as Father Paolo Dall’Oglio, and all captives and those unjustly imprisoned.”

The leaders gathered on the eve of the Centenary of the Armenian and Syriac Genocide and prayed for justice and peace. The group included representatives from the Middle East Council of Churches, the WCC, the Mother See of Holy Etchmiadzin, and the Community of Sant’Édigio.  Participants came from Armenia, Germany, Italy, Lebanon, Norway, Poland, Russ, the UK and the USA.

Read the full text of the communique

Most viewed articles
We Are Not Saint Mary of Egypt (But We Can Still Repent)210
Dining with Caesar165
What Does Asceticism Look Like?117
Orthodox Chapel to Be Constructed in Campina das Missoes54
Ukrainian Church Calls for De-Escalation of the Conflict in Donbass49
Archbishop of Australia Attends Commemorative Events for Battle of Crete in Melbourne46
Be Bearers of Light7
Most popular authors
Archpriest Geoffrey Korz210
Archpriest Lawrence Farley165
Pravmir.com team148
Archpriest Michael Gillis117
Metropolitan George (Khodr) of Mount Lebanon7
Maria Trushanina1