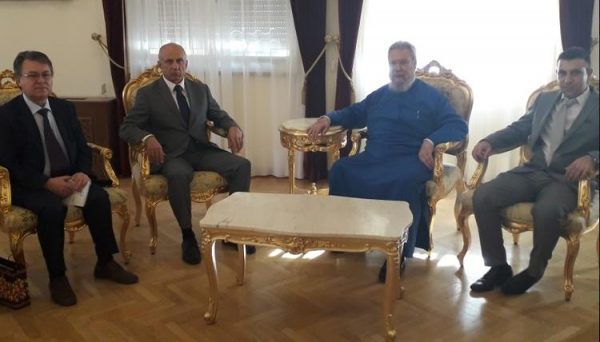 The primate of the Cypriot Orthodox Church, His Beatitude Archbishop Chrysostomos II of New Justiniana and All Cyprus, held a meeting recently with the Ukrainian ambassador to Cyprus, Boris Gumenyuk, in which the ongoing turmoil in the ecclesiastical life of Ukraine was discussed.

The Cypriot primate “expressed his worry and concern about the latest events in the Ukrainian Church and the possibility of the creation of a schism that would harm the unity of all Orthodoxy.”

The archbishop also confirmed the Church’s readiness to become a “bridge for the normalization of the unstable situation” in Ukrainian Orthodoxy today. At this time, no specific proposals from Abp. Chrysostomos have been reported.

However, in a common tactic, The Ukrainian Ministry of Foreign Affairs misrepresented Abp. Chrysostomos’ words to make him out to be a supporter of the Ecumenical Patriarchate’s granting of autocephaly to Ukrainian schismatics. The reports making the rounds in Ukrainian media differ markedly from that on the official page of the Church of Cyprus.

During the conversation, which took place in a cordial atmosphere, the parties discussed the situation in Ukraine in the context of the ongoing Russian aggression, the development of the unification processes in Ukrainian Orthodoxy, and the question of granting of the Tomos of autocephaly of the Ukrainian Orthodox Church.

The Archbishop of Cyprus Chrysostomos II expressed his support for Ukraine and the Ukrainian people, and particularly stressed the right of Ukraine as a great independent power to have its own independent Autocephalous Church.

However, “there is not a single quote or direct speech from the archbishop that would confirm this thesis,” noted Archpriest Nikolai Danilevich, the Deputy Head of the Department for External Church Relations of the Ukrainian Orthodox Church. “That is, these are not the words of the archbishop—it’s the version of our embassy, or rather, of Mr. Ambassador.”

Moreover, Abp. Chrysostomos’ position was clearly set forth by another hierarch of the Cypriot Church in July. Addressing His Holiness Patriarch Kirill of Moscow and All Russia during the celebration of the 1,030th anniversary of the Baptism of Rus’, His Eminence Metropolitan Georgios of Paphos stated, “I convey the words of His Beatitude, who assures that the Cypriot Orthodox Church will always support the position of your Church in relation to the provision of autocephaly in Ukraine.”

The Ukrainian government and media and hierarchs of the Ecumenical Patriarchate have repeatedly misinterpreted the words of Orthodox, and other, hierarchs to present them as supporting the push for autocephaly in Ukraine.

Earlier in the month, His Beatitude Patriarch Theophilos III of Jerusalem met with a delegation from the canonical Ukrainian Orthodox Church, speaking of the tentacles of globalization and the interference of politicians that were disrupting Ukrainian Church life. His words were somehow twisted into being a support for autocephaly, although His Beatitude has clearly spoken on the matter a number of times in the past.

Archbishop Theodosius of Sebastia of the Jerusalem Patriarchate has also stated categorically,

The schism in Ukraine is very unfortunate, and I hope that the Patriarch of Constantinople and the other heads of the Orthodox Churches of the world will coordinate with the Russian Orthodox Church to advance initiatives for ending this unhealthy, unacceptable, and unjustified situation.

On September 21, His Beatitude Patriarch Theodoros II of Alexandria and His Beatitude Metropolitan Sawa of Poland released a joint statement calling for those involved in the autocephaly question in Ukraine to do whatever possible to stave off the growing conflict and to restore peace.

Archbishop Job (Getcha), a hierarch of the Patriarchate of Constantinople twisted these words into an expression of support for Ukrainian autocephaly: “I understand that the [joint] statement explicitly refers to autocephaly and the establishment of canonical order in Church life in Ukraine. That is, the separation in Ukraine requires an introduction of the ecclesiastical order. Only the provision of autocephaly can solve this problem.”

As the Union of Orthodox Journalists reports, even the Roman Catholic Apostolic Nuncio in Ukraine has had to deny Ukrainian governmental lies that “the Vatican respects the decision of the Ukrainian people to create a single Local Church.”

Note that, in reality, less than 1/3 of the Ukrainian people support the push for autocephaly.