Metropolitan Nikiphoros: Patriarch Bartholomew’s Actions Have Not Healed Ukrainian Schism but Deepened and Aggravated It 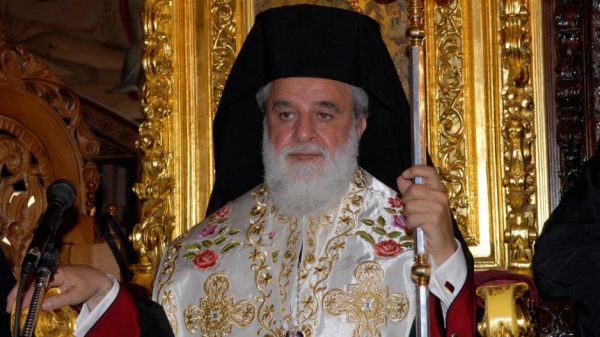 Below is the full text of the memo on the situation in church life in Ukraine drafted by Metropolitan Nikiphoros of Kykkos and Tillyria for the Synod of the Orthodox Church of Cyprus:

Concerning the problem, which has arisen on account of [the need] for autocephaly or not for the Orthodox Church of Ukraine, with humbleness and unpretentiousness, I would like to point out the following:

From the very beginning when the question of autocephaly for the Ukrainian Church arose, I was an open proponent of this autocephaly. In various talks on this topic with various persons, church and non-church ones, I supported the point of view that today a practice has been established in fact that each Orthodox and politically independent country should have an autocephalous Church of its own.

I believed that the desired autocephaly of the Orthodox Ukrainian Church would not be granted in haste and off-hand but slowly and very carefully, in accordance with the Orthodox tradition, sacred canons, and generally with the nomocanonical law of our Most Holy Orthodox Church.

Regrettably, in the whole process of declaring and recognizing the autocephaly of the Orthodox Ukrainian Church, what has prevailed instead of democratic, Orthodox, synodal procedures are not democratic and not conciliar ways of thinking and attitudes, but, I have to note with regret, rather arbitrary and forcible ones.

Whereas the All-Holy Ecumenical Patriarch Bartholomew of Constantinople had recognized and confirmed the deposition and excommunication imposed twenty years ago by the Orthodox Patriarchate of Moscow on Metropolitan Philaret and his proponents who broke away from the Russian Orthodox Church and, more broadly, from the Body of One Holy, Catholic and Apostolic Church, three years ago, in 2016, as His Beatitude Patriarch Kirill of Moscow underscored in his public interview, during the Synaxis of Primates of Orthodox Churches, the Patriarch of Constantinople promised to His Beatitude the Patriarch of Moscow himself that he would not do it, that is, would not unilaterally grant the status of autocephalous Church to the Ukrainian Orthodox Church, especially, to the schismatics, but he did it on no grounds whatsoever declaring the very same Church autocephalous. In addition, which is most sad, twenty years later he himself, contrary to his written agreement with the bans imposed on the sinners, has restored these convicts thus actually refuting himself and restoring those who are deposed and excommunicated from the Russian Orthodox Church.

In my humble opinion, this action appears to be uncanonical since, according to sacred canons, any ban, and in this case the deposition and excommunication of these persons, should be lifted by the body that imposed them, provided certainly an effective preliminary repentance of the convicts. In this connection, the Orthodox Patriarchate of Moscow alone, as it had exercised the deposition and excommunication, had the nomocanonical powers to restore the sinners and bring them back to the fold of the Orthodox Church.

In my humble opinion, there is also another, more serious mistake made by the Ecumenical Patriarch – the disdainful ignoring of Kyr Onufriy, Metropolitan of the only commonly recognized Orthodox Church of Ukraine, and instead of him, the recognition of self-ordained Epifaniy, who has no canonical ordination, as Metropolitan of Kiev and All Ukraine and granting him the synodal Tomos of autocephaly during a con-celebration with him.

Your Beatitude and holy brothers, in conclusion I should regretfully underscore that the granting the status of autocephalous Church to the schismatic community of Philaret and Epifaniy has not only failed to heal the existing schism in the Orthodox Church of Ukraine but, on the contrary, dangerously deepened and aggravated it since today, after a synodal Tomos of autocephaly has been granted, we have encountered in Ukraine a tragic phenomenon when there is a canonical Orthodox Church headed by Metropolitan Onufriy and there is a schismatic one headed by deposed Philaret and Epifaniy. Unfortunately, there is an evident danger that the military confrontation, which has lasted for three years now, may degenerate into a religious confrontation. And there is an even greater danger that the unhealed Ukrainian church schism, as many have stressed, may penetrate the Body of the whole Universal Orthodoxy with tragic consequences for it.

On the basis of the above, I have come to the conviction that we, the Holy Synod of the Church of Cyprus, cannot recognize schismatic Epifaniy, who has no canonical ordination, as the canonical Metropolitan of Kiev and All Ukraine. The more so that from the point of view of the canons, we are not allowed to have the Eucharistic communion with schismatics, especially, self-ordained ones.

Therefore, my proposal is as follows:

1) Our Holy Synod should evade from taking a stand in favour of either this or that Patriarchate, that is, neither in support for the Patriarchate of Constantinople nor that of Moscow. And to not bring to naught possible mediatory efforts of the Church of Cyprus in finding a canonical solution.

In addition, I am full of fear (and it is the worst thing) that Slavonic-speaking Orthodox Churches may take the side of the Orthodox Patriarchate of Moscow, while the Greek-speaking ones may identify with the Ecumenical Patriarchate because in this case the ill-fated schism, to a great satisfaction of the enemies of universal Orthodoxy, will drag for a long time.

2) Our Holy Synod should accept the proposal voiced in his statements by His Beatitude Patriarch John of Antioch on the speedy convocation of a Pan-Orthodox Council. And we say that if it is difficult or altogether impossible, then we should convene a Synaxis Primates of Orthodox Churches to discuss the situation in Ukraine and find a nomocanonical solution of this problem as a whole, that is, a solution in accordance with sacred canons and the tradition of the Orthodox Church.

3) I am confident that the Orthodox Church of Cyprus, which traces its autocephaly from the Third Ecumenical Council of Ephesus, can play a paramount reconciliatory role in realising the above-mentioned proposals and solution of the problem as a whole.

Your Beatitude and holy brothers, let us pray that the grace of the All-Holy Spirit may spread over us as He assembles a church council so that we, bishops of the Orthodox Church, may be humbly and rightly wise for the eternal glory of its Founder – our Lord Jesus Christ.