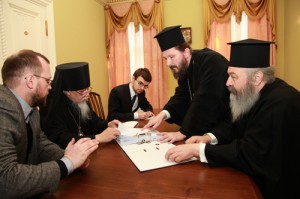 In Moscow on March 27 a delegation of the Church of Greece gave a set of documents with a detailed account of how 517,000 euros of donations raised by the Russian Church had been spent. The funds were targeted at charity projects of the Archbishopric of Athens and all the dioceses of the Church of Greece, said the Head of the Budget Department of the Church of Greece, Metropolitan Basil of Elassona at the meeting with the Chairman of the Synodal Department for Charity, Bishop Panteleimon of Orekhovo-Zuyevo. The meeting took place on March 27, in the Convent of Sts. Martha and Mary in Moscow, according to Diaconia.ru.

The Church of Greece has become one of the main coordinators of support to those suffering from the financial crisis: immigrants and the unemployed, whose number has increased considerably in Greece in recent years. According to information for 2012, the Church and municipal services distribute food to about 250,000 people daily. In Athens every day 13,000 people are given soup and other hot food by the charity organization of the Archbishopric of Athens called “Mission”. All dioceses of the Church of Greece take part in supporting the unfortunate. 89 parishes in Athens are involved in this. “Mission” is carrying out the program of delivering food to those in need: every month poor families receive 2,500 packets of macaroni, tinned food and other non-perishables.

The help provided by the Russian Church “has touched both Greek people and the Church of Greece”, noted the head of the Budget Department of the Church of Greece, Metropolitan Basil of Elassona at the meeting on March 27, “the support you have given has been shared with every diocese of the Church of Greece so that the mutual help of our Churches should be evident, so that our flock should realize that we are not alone”. Metropolitan Basil explained that of the 517,000 euros collected, 50,000 was transferred to the account of the Archbishopric of Athens and about 7,000 euros was transferred to the accounts of each diocese of the Church of Greece. The Head of the Budget Department of the Church of Greece stressed that the Church has obtained all the relevant documentation and cheques, from which it can be seen which charity projects for those in need the money raised was targeted at, both in Athens and in the dioceses. These Greek documents have been given to the Synodal Department for charity. In the near future these documents will be scanned and will appear in Russian on the “Reports” section of the Synodal Department for Charity’s website.

The Head of the Synodal Department for Charity, Bishop Panteleimon of Orekhovo-Zuyevo, thanked the representatives of the Church of Greece for giving him the documents. “It is important for those who donate to the Church, to know where their donations were sent”, said Bishop Panteleimon and in this connection he stressed the importance of transparency in the Church’s financial activities.

“Our people have had to go through many trials. People see the work of the Church, they see that the Church helps everybody who asks for help—including Muslims, Jews, and Buddhists,” said Metropolitan Basil of Elassona. “In Greece we are even criticized by many for our help to those of other faiths.”

According to the Metropolitan, at present the number of those in need whom the Church helps has increased in comparison with last year. The unemployed and immigrants are still given free food in the streets of big towns and cities; furthermore, the Church is organizing aid collection in supermarkets: containers stand at the exit where consumers can put food or clothes that they have bought for those in need. Then all these things are distributed in the dioceses that give the food and clothing collected to the unemployed, pensioners, large families and the elderly. “The economic crisis has become a good opportunity for the Church to show its true self. Even people who are extremely critical of the Church and do not attach any importance to spiritual life recognize the huge role of the Church in supporting those who are suffering from the crisis,” said Metropolitan Basil.

The Director of the Budget Department of the Church of Greece, Bishop Antony of Salona, Press Secretary of the Synodal Department for Charity, Vasily Rulinsky, and a member of the Church’s Department for External Relations, Valery Mamonov, also took part in the meeting in the Convent of Sts. Martha and Mary.

We recall that on July 20, 2012 the Synodal Department for Charity transferred 517, 628 euros to the account of the Church of Greece. This sum in support of those in need in Greece was collected with the blessing of His Holiness Patriarch Kirill. Donations were received from the beginning of February 2012 from all over Russia and abroad. The donations ranged from 100 roubles to 400,000 roubles. Not only parishes and monasteries donated to support Greeks, but laypeople as well.