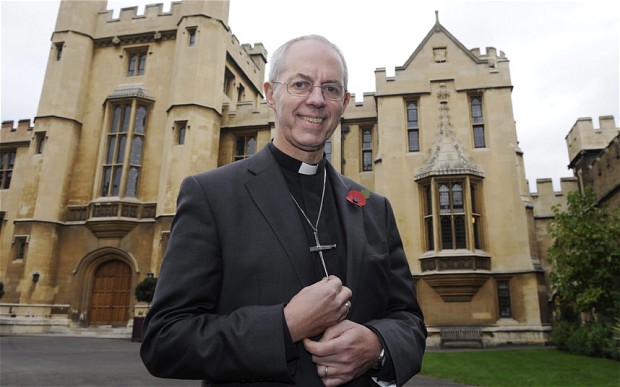 Gay couples who get married will be able to ask for special prayers in the Church of England after their wedding, the bishops have agreed.

But priests who are themselves in same-sex relationships or even civil partnerships will be banned from getting married when it becomes legally possible next month.

The blanket prohibition opens up the prospect of an embarrassing rebellion from gay and lesbian clergy who choose to tie the knot.

It would force local bishops to bring lengthy disciplinary measures to effectively have them defrocked for getting married.

It is understood the Church is already bracing itself for “martyrs” prepared to challenge the rules.

The ban, contained in new “pastoral guidance” from the Church of England, comes despite rules which allow those in civil partnerships to become priests and even bishops – as long as they claim to be celibate.

But the guidelines, announced by the House of Bishops ahead of the coming into force of the Same-Sex Marriage Act next month, also state that non-clergy who get married to someone of the same sex will be free to continue to receive communion within the Church of England.

Although the Church will not be carrying out same-sex weddings, the new guidance also invites newlywed gay couples to ask their local priest for special prayers which will be seen as informal endorsements of their marriage.

The main stipulation is that the priest must not refer to it as a service of “blessing” – a term which is deeply divisive in the Church of England for theological reasons.

They must also have some form of “pastoral discussion” with the couple about why they do not accept the official church teaching which still maintains that marriage is between a man and woman.

But the new guidance makes clear that gay newly-weds must not be subject to intrusive “questioning” about their private lives.

At the same time the guidelines make clear that it will not be “appropriate conduct” for anyone in holy orders – deacons, priests or bishops – to enter a same-sex marriage.

Lay members who do so will also be barred from ordination.

Last night one leading liberal campaigner described the new arrangements as a “dog’s breakfast” which enshrined “dishonesty and hypocrisy” within the Church.

But the deal, reached in a meeting of bishops behind closed doors, will also anger traditionalists who see any endorsement of gay marriage as a major departure from what they see as the teaching of the Bible.

Copies of the guidelines were last night sent to bishops and archbishops in other Anglican churches around the world, many of whom have already publicly accused the Church of England of drifting away from Biblical orthodoxy.

In a joint letter accompanying the guidelines, the Archbishop of Canterbury, the Most Rev Justin Welby, and the Archbishop of York, Dr John Sentamu, acknowledged that there are deep divisions in the Church of England – including between bishops – over the issue.

They described same-sex marriage, which will be possible in England and Wales from March 29, as a “new reality” with implications for the Church of England.

While insisting that traditional doctrines remain unchanged, they added that they recognise that same-sex relationships contain some of the same “virtues” as marriage, upheld by the Church for centuries.

The new law comes into force as the Church itself prepares to carry out a lengthy programme of mediation to work out its reaction to a controversial report recommending public services to “mark” gay relationships – likely to be seen as weddings in all but name.

The Archbishops said: “As members of the Body of Christ we are aware that there will be a range of responses across the Church of England to the introduction of same-sex marriage.

“As bishops we have reflected and prayed together about these developments.

“As our [previous] statement … indicated, we are not all in agreement about every aspect of the Church’s response.

“However we are all in agreement that the Christian understanding and doctrine of marriage as a lifelong union between one man and one woman remains unchanged.”

They added: “Same-sex relationships often embody genuine mutuality and fidelity …. two of the virtues which the Book of Common Prayer uses to commend marriage.

“The Church of England seeks to see those virtues maximised in society.”

The bishops’ guidelines say: “We recognise the many reasons why couples wish their relationships to have a formal status.

“These include the joys of exclusive commitment and also extend to the importance of legal recognition of the relationship.

“To that end, civil partnership continues to be available for same-sex couples.

“Those same sex couples who choose to marry should be welcomed into the life of the worshipping community and not be subjected to questioning about their lifestyle.

“Neither they nor any children they care for should be denied access to the sacraments.”

They then quote previous Church decisions on civil partnerships ruling out “services of blessing” while refusing to “interfere with the clergy’s pastoral discretion” about more informal ways of marking the moment.

“The same approach … should therefore apply to couples who enter same-sex marriage, on the assumption that any prayer will be accompanied by pastoral discussion of the church’s teaching and their reasons for departing from it,” the guidance adds.

“Services of blessing should not be provided. Clergy should respond pastorally and sensitively in other ways.”

The Rev Colin Coward, director of the Changing Attitude group, said: “I know of at least one couple, including a priest, who have already booked their wedding and told his bishop that he has got a date booked.

“So the Church is going to have to confront the reality that clergy couples will be getting married and the question of what kind of action individual bishops are going to take against such people.”

He added: “It is not only a dog’s breakfast but many inside the Church know perfectly well that significant numbers of bishops already break the guidelines [by ordaining non celibate gay clergy]…. The reality is that dishonesty and hypocrisy is becoming more and more apparent.”