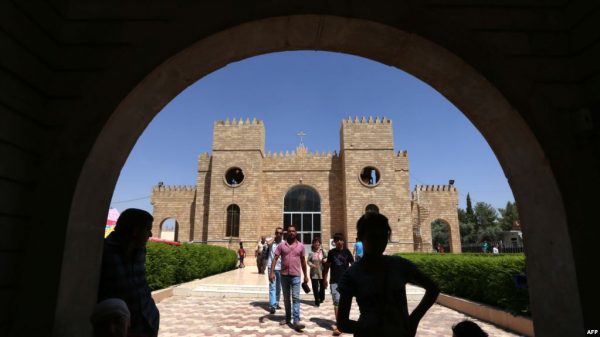 TEL SKUF, Iraq — After being destroyed in the ISIS conflict, Saint Jacob’s Church once again can be seen as part of the cityscape in Tel Skuf.

Most of its residents fled when the area was a frontline between Peshmerga and ISIS until mid-2017 when the militants were pushed out. The town 30 kilometers north of Mosul city is the security responsibility of Baghdad.

But now various organizations are supporting rebuilding efforts. The exterior is nearly complete and the bell tower is in place.

“Of course, this church is one of the cultural landmarks, and we’re preserving it. We must rebuild it in order to encourage the people to return. It’s necessary to keep these cultural landmarks in Tel Skuf,” engineer Lloyd Najim told AP.

The restorations are supported by the Centre of Human Rights Cottbus, a German-based organization.

Fewer than 600 families are now living in the town. The ongoing reconstruction projects did not prevent the young from leaving.

“I’m tired of having to leave and then having to return again and again. We all got tired and we are getting old,” said local Selima Loqa. “We went to Al Qosh, we went to Enishki (Duhok), we went to …”

The houses and shops in the village were left in ruins, but are being refurbished by a local charity foundation, established by priests in Tel Skuf.

“I mean we have suffered, and we went to Lebanon. Every time we leave and then return, we buy houses over and over again. What can we do? Situations like this must end.”

Return to the disputed areas by minorities is still a concern with nearly daily reports of attacks by ISIS remnants.