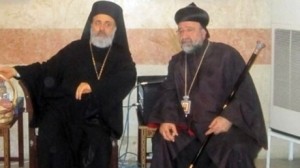 The kidnappers of two Orthodox bishops seized in northern Syria are Chechen fighters, sources in the Syriac and Greek Orthodox dioceses in Aleppo said on Tuesday.

“The news which we have received is that an armed group… (of) Chechens stopped the car and kidnapped the two bishops while the driver was killed,” an official from the Syriac Orthodox diocese who declined to be named said in a statement posted online.

Syrian state news agency SANA had reported the kidnapping on Monday night, saying an “armed terrorist group” kidnapped the men in the village of Kafr Dael in Aleppo province.

A source in the Greek Orthodox diocese, speaking to Agence France Presse on condition of anonymity, said Ibrahim “was on a humanitarian mission to free two priests kidnapped two months ago.”

Ibrahim was known for his role in mediating the release of kidnap victims, particularly in cases involving the snatching of Christians, the source said.

He was returning from an area along the Turkish border, where he had picked up Yaziji, when an armed group stopped their car in Kafr Dael, he added.

The kidnappers forced the driver and another person out of the car, he added, saying the driver was subsequently shot in the head.

“According to this person, the kidnappers spoke classical Arabic and appeared to be foreigners. They told them that they were Chechen jihadists,” the source said.

In the statement, the Syriac Orthodox official said there had not been any contact with the kidnappers so far.

“We are working and doing our best for the release of the two bishops and (their) return,” he said.

Syria’s religious affairs ministry (Waqf), meanwhile, issued a statement on Tuesday saying “there is evidence that those who kidnapped the bishops were Chechen mercenaries working under the leadership of al-Nusra Front.”

Christians account for around five percent of Syria’s population, and have become increasingly vulnerable to attack and kidnappings in the lawlessness that has engulfed much of the country since March 2011.